By placing his chakra into the ground beneath him, Kusanagi can 'activate' the chakra later. Upon activation, an ear-rattling sound is produced, and a glyph develops beneath the target. From there, an explosion occurs, creating smoke. Chains lash out, wrapping around the target before beginning to siphon chakra. TBA 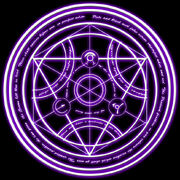