Aijou(あいじょう,Aijou) is a Jōnin-level kunoichi who is a member of teh Yuki Clan and is also a member of Team Kawarama.

Aijou was born into the Yuki Clan by two shinobi parents. During the events of teh Second Neo Akatsuki War bother her mother and father had died, she later enrolled in the Hakkingakure Academy. After graduating she along with Haru Uzumaki and Kitsui Sekkai became students of Kawarama Uchiha and formed Team Kawarama.

Aijou is a fair-skinned young women with a curvaceous body with bright green eyes. Her pink hair reaches down to the middle of her back, is quite wavy, and is accompanied by a dark brown head piece with earmuffs. Her outfit after consists of a red dress with a ruffly trim around a deep neckline that exposes a large amount of her now ample cleavage with a short skirt and a belt tied around her waist and black colored stockings and brown boots.

Whule a genin, she had short, hair. She wears some sort of gold wing-like headgear around her ears.[1] Her uniform is a tight, purple leotard with brownish thigh-high boots that have white stripes at the top. Over her uniform, she wears a red cape with a golden lining around the edges.

As a child, Aijou was very stoic, mature, and calm individual. To her enemies, her speech seems almost robotic, as she pauses between words and refers to her missions to "exterminate" and "annihilate" her enemies as the "prime directive". After becoming a Jōnin, Aijou became more cheerful but is also seems to be more modest.

Like the other members of her team, she is a gifted individual having been trained by bothe her parents and Kawarama, Aijou has been noted to be vary dangerous and powerful.

Ajou is able to utilize both water and wind nature manipulations to create Ice Release. Her power over ice granted her special techniques, like the Demonic Mirroring Ice Crystals, Ice Release: Ice Dome, Ice Release: Golem Technique and the Ice Release: Jagged Ice Wall. she also has some skill with the Yin Release 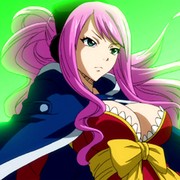