Akari Uzumaki is a kunoichi from Kirigakure and a member of the Night Sabers.

Akari is strong willed but is prone to acting before talking. She would do anything as long as it's for her family, and cares deeply for her friends. She is an arrogant, impulsive and stubborn girl, known to be very tomboyish, but very level-headed and cheerful. Despite her calm and kind demeanor, however, her quick temper would occasionally lead her to lash out violently at others if they anger her. She is also very impatient, disliking people who don't answer her questions quickly enough. Also, Akari has stated that she feels uncomfortable and insecure when alone. She has an intense fear of flying.

Akari is a young woman who has long, scarlet hair tied into a pony-tail and featureless red eyes. She has a slender figure, and small breasts. Her most common attire consists of a red and white tunic with a black skirt, black gloves with gold trimming, a pair of bracers, one red and one gold, closed-toe white-gray sandals with high heels along with dark-red mesh fishnets extending to her thighs, and wields a giant sword with a ninja-tō-like appearance.

Akari is highly proficient in kenjutsu, and has good teamwork skills with her team-mates, able to use fluent attack patterns without communicating with each other during their mission to Hoshigakure. She also incorporates Fire Release ninjutsu in her collaborative attacks with her allies. She uses a giant sword with a ninja-tō-like appearance as her weapon of choice, able to swing it with one hand. She also is able to defend herself against long-range specialists with her swordplay. She can easily counter a barrage of attacks with a single swipe of her blade and just as effectively attack from behind herself surprising his opponent. She has also shown herself very clever in battle, able to use feint attacks and deceptions with shadow clones or the Body Replacement Technique as set ups for a final blow. Akari's sword skills were passed down to her from her father, Hitomoshi Shakunetsu. She mastered her father's teachings very quickly and improved upon it to make it her own. However, she wasn't satisfied with her training, so her mother, Chizuru Uzumaki, decided to take her daughter on a journey around the world to become a better swordsman.

As a member of the Shakunetsu clan, Akari has a natural affinity for Fire Release. She utilizes wild, irregular-shaped flames as well as round-shaped fireballs. She is also capable of summoning pillars of flame out of the ground by stabbing her blade into the ground.

From an early age, Chizuru taught her children the sealing techniques of their clan. By age 12, Akari had mastered multiple sealing techniques. Under her mother's tutelage, she has even learned the Four Symbols Sealing Method, though she has far from mastered it. A unique seal she developed herself is imprinted on the back of her right glove. The seal helps channel Fire Release chakra through her weapons, allowing her to perform high level Fire Release techniques using only one hand for the seals.

Akari was E'Athanata's second attempt to create a character. She is part of the Night Sabers, the first plot E'Athanata wrote. 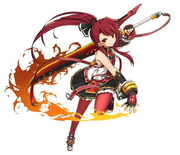