Ashura Mode (アシュラード, Ashura Mōdō) is a technique originally used by Asura Ōtsutsuki, and was strong enough to stand toe to toe with the Susanoo. This technique is considered the strongest of all techniques in the shinobi world.

This technique originally lacked a name. Though, because it was heavily influenced by Asura's very own battle avatar Naruto Uzumaki found it appropriate that it should be named after him. Naruto has stated on the true successors of Hagoromo's ideals and sacred chakra can unlock this ability. Not only does one have to have this very holy chakra, but you must also have a pure positive heart. This special transformation has been classified as a gift from the angels up above. 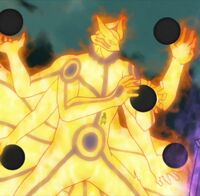