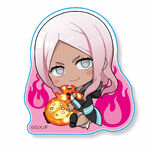 Main article: The Start of Everything

Five years following the Fourth Shinobi World War, Asuna was born on a beautiful morning in August to Sooun and Yuno Kurama.[4] Blessed with her father's smooth chocolate skin and her mother's renowned beauty — particularly her white-pink hair and hypnotic eyes, Asuna beauty was known and praised throughout the clan and village. As the only child of Main family within the Kurama Clan, she was also the clan's heir, thus, destined for kunoichi life.[5]

Despite the universal peace the village was enjoying, Asuna's early years were filled with chaos and confusion. Unfortunately, Asuna did not inherit her father's charm nor her mother's glamour. Actually, she was somewhat of a delinquent. She cared not for other's feeling as she often bullied people her age and had little to no remorse for her actions.[6] Sooun paid little attention to this behavior as Asuna showed prodigious potential in almost every facet of her life.[7] But her mother began to notice something dark and foul with her.[8] Then, at the age of four, everything changed when Asuna awakened her Kekkei Genkai. Her cruel nature and inability to handle her power prevented her from commencing the accelerated track her father had planned. Her habits and questionable tendencies along with her unholy power earned her the nickname the Witch (魔女, Majo).[2]

As her name and habits became a safety hazard for villagers, Asuna and her father met with the newly appointed Seventh Hokage who essentially designated them to house arrest — albeit under the advisement of his council, until she had some control over both her powers and desires.[9] Being removed from society, there was only one person Asuna could harass as her father was too skilled of a shinobi to succumb to her antics; her mother. Asuna repeatedly tortured Yuno in various ways as her father attempted to train her.[10] Over the next two years, a rift developed between the two to the point of no return; Yuno labeled Asuna as monster.[10]

One day, at the age of six, Asuna was introduced to her half brother, Minegumo Kurama — who had been welcomed into the Main Family's home due to the awakening of his Kekkei Genkai.[11] While their initial encounter was cut short due to Asuna's lack of restraint, the two would sneak out in order to talk about their past and similarities.[12] After only a brief discussion, Asuna quickly deemed her brother to be idiotic and inferior; stating that the two of them are nothing alike.[13]

In the months following, Asuna and Minegumo trained together under the supervision of their father. Throughout this duration, Asuna underwent a dramatic change in personality and character; Asuna's negative reputation had seemingly faded as she made friends and stopped harassing people.[14] Unknown at this point, this sudden shift in character and her ability to forgo a passing moment of interest would start her on a path to becoming a high-function psychopath. Days after attending the Ninja Academy's welcoming ceremony, Asuna and Minegumo fought one another in a spar in front of their father in order to gauge their abilities before attending the academy. [15] Unlike most academy student battles, which primarily encompass very basic taijutsu, the two performed feats that even surprised their father.[16] Despite her broadcasting sophisticated tactics and an unusual affinity for deception, Asuna lost her first battle against his brother.[17]

In the two years following their battle, Asuna was admitted into the academy and displayed exceptional talents in nearly every class; she along with her brother were regarded as the best of their generation.[18] During this time, Asuna maintained her nice girl farce in order to maintain her admittance within the academy; she studied how both her peers and her professors acted and mimicked the other's natural behavior. Additionally, Asuna underwent her own form of training throughout this two year period. She not only expanded her arsenal of techniques, she studied strategy and how better human psychology.[19]

Despite her age and the peaceful times throughout, Asuna was allowed to take the final exam due to her talent.[20] Scoring a perfect on the written exam, Asuna immediately took note of the practical exam's true nature; she immediately planned on using the majority of the class' females as her subordinates.[21] However, once the exam started, her group was immediately intercepted by genjutsu specialist Kurenai Yuhi and was taken out within moments of the exam. [22] After unsuccessfully challenging her superior in individual combat, Asuna setup an informal alliance with her brother and his underling to take on Kurenai.[23] In a semi-united effort, the team managed to successfully apprehend and strip the retired jonin of the bells.[24] While unhappy in the manner, Asuna graduated with her brother with nearly perfect scores.

Pleased that both of his children graduated, Sooun decided to commemorate the occasion by hosting a family dinner; involving both wives and children.[25] Surprised to see her mother, who had been bounded to the confines of her room through her own volition, Asuna's apathetic nature began to reveal itself once again. Not only going after her mother but all dinner participants, Asuna turned the joyous occasion into a heated argument.[26] After turning Mika against Minegumo for his devious acts during the exam, Asuna's attacks were seemingly shut down by her mother; who slapped Asuna multiple times. Unable to recover from the shift of power, Asuna fled from the dinner table confused.[27]

Troubled by his sister's actions, Minegumo approached Asuna immediately following the ruined occasion.[13] Disgusted by the fact that Minegumo actually considered himself an authority in the matter, Asuna decided it was time to re-establish her superiority over her brother after losing it somewhat during their first confrontation.[28]

Bating her brother to following her to the Konoha training ground, the two both snook out to settle their issues. During their battle, Asuna broadcasted two years of training in its entirety. Setting the pace, Asuna displayed a newfound knowledge of shinobi strategy and tactics.[29] She showed little hesitation and did not care for her brother's well-being; striking him with lethal intentions.[30] Minegumo was demonstrated considerable advances as well, performing various well-designed techniques. However, in the end, Asuna would overcome her brother's techniques and defeat him by using the knowledge she got from the actions and reactions from dinner.[31] After verifying her victory, Asuna left her brother injured and unconscious in training field to figure out his injuries on his own.[32]

Upon returning home, Asuna noticed an odd feeling coming from their estate.[33] Navigating to her mother's room, Asuna found her father with her mother's lifeless corpse in his arms; she committed suicide shortly after dinner.[34] Instead of feeling sadness or sympathy, Asuna was pleased that balance had been restored.

Main article: Digging up the Root

Since birth, Asuna has been heralded as an unmatched beauty.[35] Asuna seemingly inherited both of her parent's most attractive qualities — her mother's white-pinkish hair along with her dazzling blue eyes and her father's smooth milk chocolate skin.[36] It was later revealed that when Asuna utilizes her chakra, her eyes turn from blue to neon pink, reminiscent to a dōjutsu activation; it's actually genetic mutation that only occurs once in every million people. As she left her delinquent nature behind, Asuna was regarded as one of the most popular kids her age primarily due to her beauty.[37]

Given her age, Asuna has displayed superb control over her chakra. Beyond her genjutsu prowess, Asuna has been able to focus her chakra to specific areas of her body in order to perform techniques like the Tree Climbing Tehcnique.[38] She is also able to transfer her chakra into inanimate objects in order to compromise their structure or augment their proportions.[39] While her chakra reserves are nothing extraordinary, Asuna's control allows her to not waste any chakra; allowing her to conserve and remain in the battle for an extended duration.[40]

Despite barely training her body, Asuna has shown above average speed and mobility.[41] She also has an incredible tolerance for pain as she was able to pierce her lip with her teeth without a second thought and then continue the battle.[42]

Consistent with her clan's affinity for illusions, Asuna has displayed a natural aptitude for Genjutsu. At the age of six, Asuna performed numerous techniques within and outside of battle.[43][12] Despite her youth and inexperience, Asuna understands how to properly combine reality and illusion to properly deceive her opponents.[44]

Under the tutelage of Sooun, Asuna understand how to dispel genjutsu by disrupting her chakra flow and even inflicting pain onto herself. [42]

Like her brother, Asuna is one of the few to awaken her clan's infrequent Kekkei Genkai.[2] Awakening the ability at the tender age of four, her lack of control caused trouble for both her and her family.[9][10] After two years of training under her father, one of the village's most decorated genjutsu practitioners, Asuna displayed the ability to channel her power at will and use the power in conjunction with specific genjutsu.[45] Unfortunately, Asuna has yet to master the Kekkei Genkai as when her chakra reserves are nearly depleted the Ido within her attempts to take over.[46]

Despite her delinquent nature, Asuna is incredibly intelligent as seen through her ability comprehend and learn things rather quickly.[7] Asuna has been shown to be generally pragmatic in her decision making, rarely allowing emotion to influence her decisions — dealing with her brother seems to be the exception to that rule.[47] Beyond her natural talents, Asuna is very manipulative. Asuna has been able to read people with and without her Kekkei Genkai and adapt to situations with relative ease.[14]

Retrieved from "https://narutofanon.fandom.com/wiki/Asuna_Kurama?oldid=876877"
Community content is available under CC-BY-SA unless otherwise noted.