The Bandai Clan (万代一族, Bandai Ichizoku) are a recently formed family residing in the village of Ei. Formally founded by Satori Uzumaki, it consists of her and her progeny, as well as the other children of the Adjudicator, considered by several to be the clan's ancestor. Through the maternal line, they are related to the Uzumaki as well as the House of X, an explanation for certain traits they display via genetic throwback. The clan is most notable for their enduring vitality, gaining the moniker Young Elders (年若古老, Toshiwaka Korō; lit. "Youthful Elders").

A clan first founded on necessity. Like her grandfather before her, Satori was concerned with the rapidly widening proliferation of the family's ability and the knowledge of its existence. Having seen the massacres of her ancestors before her by jealous powers at be, and the exploitation/experimentation that made the healing ability to begin with, it was vital to safeguard her loved ones. Added to this was the mystery of her dōjutsu, with only one previous wielder; in her mind, a place to practice and study the eye was needed. Thus, the Bandai was born from these two desires, with its formal incorporation made official by the Third Eikage. Though composed of only one member at time (herself), Satori anticipated that the clan would grow with the addition of her immediate family members. However, she did not foresee how this would take place.

A wondrous wedding day would be interrupted by the appearance of an old foe. Or so they thought. Instead, they found a young woman who shared a striking resemblance with the hated nemesis. However, fury would give way to confusion and shock as she began to speak of her origins. Born from years of experimentation on their shared mother through the Legendary Shinobi Progeny Project (LSPP), Ori would reveal that she wasn't the only survivor of study, having spirited away the rest to various locations in an effort to keep them away from her father and his various henchmen. From that tenuous point onwards, Satori would find an additional cause, making use of the newfound sibling and her resources to begin tracking down these additional family members, if only to make certain of their safety and convince them to move to Eigakure.

Due to their diverse range of backgrounds and origins, the clan is home to a variety of skillsets. The most prominent of these are their fūinjutsu and sensory prowess, both traits of diluted Uzumaki ancestry that serves as their primary uniting force. As such, they are generally summarized as sealing specialists, with their unique clan seal being particularly sought after. More understated is their taijutsu prowess, with various members being practitioners of versatile and highly mobile styles such as Capoeira and the many schools of Pencak Silat. However, their most prized abilities lie in the bloodlines they inherited. For example, since they are distantly related to the Uchiha, clan members have a small chance of inheriting the fabled and much derided dōjutsu. Nevertheless, they are far more likely to possess the skills that stem from the founder and ancestor.

Main article: Revitalization Technique The first and by far most common (having appeared in every member so far) of their kekkei genkai is the Revitalization Technique. Originating in the House of X, it would be passed down through the generations to Satori, her siblings, and her descendants. Those who possess it are characterized as beings composed purely of chakra. This has several effects on their body. One, it means they possess a far greater quantity of the energy source compared to their average shinobi counterpart. Secondly, upon reaching their prime, they cease aging, due to the timeless nature of chakra. As such, they appear frozen, appearing in their 30s decades after those days have passed. Perhaps the most coveted aspect of this bloodline limit is its healing; a trait that has earned its carriers their fair share of infamy. With it, they can heal from seemingly mortal wounds in seconds, whereas minor cuts and scrapes disappear as soon as they're made. Nevertheless, it is not perfect, as it cannot repair lost appendages, such as a lost arm or leg. Likewise, it is subject to dilution; further generations have materialized it less and less, with the effects weaker than the original. It's estimated the skill could disappear entirely in a few generations.

Main article: Chōwagan Of the two bloodlines the clan lays claim to, this is the rarer one. As of now, it is thought to be possessed solely by the clan's founder; it's later revealed her eldest possesses it too. Among it's earliest demonstrated traits is a seemingly innate grasp of space-time. Whether that was creating a room, accessing the dimensions of others, creating dimensions for the user's discretion, or teleportation. Among it's strongest abilities is one that functions as a final call, proving the death knell for this misfortunate to fall under its sway. Likewise, it has a powerful grasp of chakra sensory, breaking down the appearance of an individual's chakra system into many multi-colored strains that tie the viewed target to other people and kin. However, those who have witnessed this dōjutsu hypothesize that is capable of other feats, limited primarily by a lack of knowledge due to it's newness. 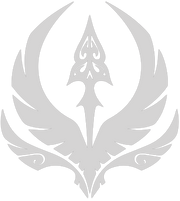