The Carbonisation Technique (炭化の術, Tanka no Jutsu) is protean, whole body technique, similar to a certain other technique, however this one instead grants the user the ability to turn their body into fine grains of course soil, each of these grains are of Planck length, roughly equal to about 10-20 times the size of a proton. This lets the user easily pass through any material by letting his cells pass through those of the object their passing through. This is an original technique developed by the brightest minds within a certain village located in a remote forest.

This technique grants the user the ability to transform their body into fine grains of course soil, and manipulate it to such an extent that controlling it, comes as almost second nature to the user, being able to manipulate their body almost sub-consciously. This technique grants the user a wide array of abilities, such as passing through solid objects by breaking down his body at a molecular level, similar to certain bloodline traits, complete immunity to any physical damage, and the ability to shape almost any object or weapon. This technique is, however, slightly more sensetive when compared to its sister technique, allowing punches and projectiles to safely pass through them even while not concentrating. By observing wind direction, along with proper timing, the user can use the air currents to scatter his particles around and reform them them elsewhere at an instantaneous speed, at the expense of using a larger amount of chakra to push through the force of the wind, while being so light. Some other applications involve the user to increase or decrease their density by increasing or decreasing the distance between his cells, resulting in both their size and weight adjusting to accomadate for the changes, granting them the ability of flight. By absorbing the earth around them the user can increase their own mass or by performing the opposite can decrease their mass, this is especially handy when in a desert, only needing to use his chakra to grind the sand into finer particles. 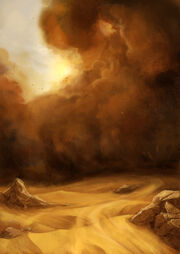