Similar to Madara Uchiha's ability to call meteors down from the skies, Ryun will first create a large mass of rock and earth with Chibaku Tensei. He will then use the Deva Path's ability to control gravity in order to bring the mass of earth down on his targets, causing an explosion large enough to decimate an entire battlefield, or even a hidden village.

The technique requires his Susanoo, as he needs extra hands to preform seals with. The downside to this technique is that he must use it while at a great distance from the site he wishes to destroy. If he is too close, he too will be killed, as the resulting blast is strong enough to overwhelm even Susanoo's defense.

Upon completing this technique, it is revealed that it is indeed the same technique used by Madara. The user weaves three hand seals simultaneously, by doing so in conjunction with their Susanoo, in order to draw massive meteorites from the upper atmosphere down towards a specific location on the ground. As they descend in succession along the same trajectory, if one of these meteorites is stopped, another collides with the first like an enormous hammer, breaking both apart and ensuring that they crash into their intended destination.

The impact of this technique was of such enormity that it devastated a significant portion of Gaara's Fourth Division when used against them, with the resulting tremors being so great, they could be felt as far away as the Allied Shinobi Forces' HQ. 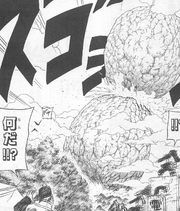