Deva Clan (テン一族, Deva Ichizoku) is a secret Clan created by Five Nameless descendents of Hagoromo Ōtsutsuki. The creators of the Clan were originally members of Ōtsutsuki Clan but because of Kaguya Ōtsutsuki and her abuse of power which had destroyed the Clan reputation, this Five Members seeking for a new beginning decided to separate from the main family and create a new Clan that would follow the teaches of Hagoromo, this course of action eventually lead more Ōtsutsuki Clan members to abandon their surname and becoming a part of the new Clan.

A millennia ago, a decade after Kaguya single-handedly ended the wars, the first signs of madness started to manifest on her. The closest members of the her Clan started to ear phrases like "They must be enslaved, when I'm gone the floor is gonna become red again" or "Humans fight because they want to be better then the next one, if they were all equal the fights should stop ... yes that's it, equal, like flowers on a field, no one can be picky if they are all equal".

Eventually her madness had increased to the point where she killed some of her own Clan members when they tried to convince her give up on her plans, her plans against humanity made her be called a demon and multiple riots started to happen against her.

The riots only made her madness worst and she started to trap and transform the rebellious into her private army. This course of action made her sons and the Five Most Powerful Members of her Clan turn against her. Eventually both sides clashed and Kaguya's sons had to fight against her mother and the other Five Members fought against the rest of the Clan and against ten thousand white zetsus. When the battle ended Kaguya and the Zetsus were trapped inside one degraded form and were sealed in the moon.

After the battle Hagoromo and Hamura become the leaders of the Ōtsutsuki Clan. Hamura decided to go to the moon with half of the cla to guard Kaguya and Hagoromo with the Five Members and the other half of the clan stayed on Earth to spread Chakra to humanity. Despite Hagoromo played a major role on Kaguya's defeat he still was considered a member of the demonic Clan (name that people gave to the Ōtsutsuki Clan due to Kaguya actions) but when they saw a demonstration of what Hagoromo could teach them, they decided to temporarily put aside their hatred to learn how to use Chakra, this eventually led to a small era of peace and mutual understanding without talking.

Many years after this events, Hagoromo was growing weaker because of Ten-Tails inside him, after splitting the Ten-Tails Chakra in nine, Hagoromo was killed shortly after by a descendant of a person that was transformed into a White Zetsu.

This lead to a riot made by people that had hidden their grudges against the Ōtsutsuki Clan to learn how to use Chakra and since Hagoromo was no longer useful, they wanted to get revenge by killing the remaining members of the Ōtsutsuki Clan. The Five Members saw that the reputation of the Ōtsutsuki Clan was destroyed long ago and was beyond salvation, so they decided to start from the beginning by creating a new Clan and isolate themselves to "cool their heads" and start over. Their first action was to give up their surname and build their base of operations in the sky, shortly the remaining members of the Ōtsutsuki Clan on earth joined the new Clan embracing "Deva" as their surname and left behind the past to follow the teaches of Hagoromo.

Clan Deva main base of operations is a giant piece of land ripped from the bottom of the sea that was divided in various parts and suspended in the sky above the sea by the five creators of the Deva Clan using the Deva Path hundred years ago. The floating land was then shaped in the form of a flying city to allow members of the Clan to live there, this was made because the Clan members were seeking peace and enlightenment and since normal humans can't fly and all members of the clan can use Deva Flight Technique this would be the perfect way to hide the city. Also to prevent unknown entrances in the city a very powerful barrier was created that acts like a shield misguiding every living being that doesn't have a rinnegan (does not make the city invisible) making impossible to find the city even when knowing it's location, and thick white clouds were created to prevent the city from being spotted.

It's the main area of the Deva hideout and it's called the Draigrassill City, it's where the most part of the Clan resides.

Is a small city which is surrounded by a huge circular wall. The buildings in the city resemble small palaces, with some of the buildings floating in the air. There is a huge water stream that it's supplied with water from the rain and thanks to a special treatement Ninjutsu the water is treated and cleaned and then distribuited around town, outside of the circular there is nothing except a great sea of clouds.

Special condominiums or "Draiga" like they are called by Clan Members, are special residences that belong to the most influential members of the Clan.

Unlike the Draigrassill city where the houses are all together, this condominiums are isolated pieces of earth that belong only to one family allowing more privacy and comfort, the shape varies from house to house but normally is a big open space with a source of water and other constructions that the owner decided to do, like the city, this places are also protected by the main barrier but they can also have other special barriers if the owner wants. 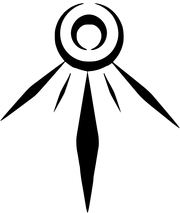