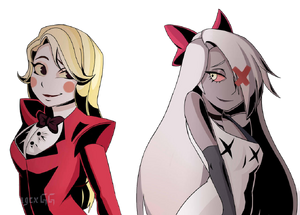 The Getsuyagan (月夜眼, Literally meaning: Moonlit Night Eye) is a mythical Kekkei Mōra that existed since before the Sage of Six Paths and the Rinne Sharingan. A mythical dōjutsu transcends from the blood of a moon goddess that once ruled earth for billions of years, only to vanish leaving this bloodline hidden among her descendants. The eye is characterised by violet blue irides, with a bright blue moon like appearance in the eyes.

The eye is characterized as a deep ocean sapphire moon much like reflecting its appearance, the pupil is black and dilated back upon being activated by the user. Once not active the eye will change into a pale blue around the center while the color darkens on the outer area into a shade of blue-magenta, the pupil changing to a deep blue. The eye first awaken has been depicted that the Getsuyagan is at its purest and rawest potential to whoever awaken it.

The Getsuyagan inherited by presumed mythical lineage of Tsukuyomi Mikoto has left her descendants with purple eyes by birth. Those who inherited this rare lineage is characterized with a indescribable cyan blue aura that flickers within them. It also appears unlike the other two great dōjutsu of Méihuā, only three members of Tsukuyomi's blood possess, and can use the kekkei genkai upon their fifth birthday. The eye itself is impossible to inherit due to the rarity of it appearing after every sixty years. The Getsuyagan's power have left it highly coveted by the other powerful kingdoms which drive many that held ties to the dōjutsu to near extinction.

The Getsuyagan possess powers only seen by the users that inherited it, each user wields different aspects of the eye and its nature, this power grants the user lunar and Psionic capabilities that serves as the user's sword and shield for it's wielder. The user is granted the capability to control and harness psionic energy at will, being able to manipulate it to form various forms for the user's benefit from makeshift platforms through their left eye, the right eye grant them the power to form various weapons or tools through a users spiritual warrior but this ability can also lend anyone a tool granted by the user themselves although few members that wields this eye has limits to how many they can share.

The Getsuyagan's other ability is the power of lunar perception through moonlight, this power is regarded to be the shield of the wielder and their greatest ability to possess. Through moonlight the Getsuyagan gives the user consciousness and perception of their surroundings through the moons light much like Sensing Technique, a unique sensory that grows by the amount of moonlight but each user has a limit to the amount of radius they can see, this ability also works in favor for those who are permanently blind or temporarily is blinded by tools but does not effect their moonlight sensory accept soundwaves. Another skill within the Getsuyagan is casting genjutsu on their victim(s) through the reflection of the moon or by establishing eye contact with the target, trapping their victims in a illusion which is at its strongest during a full moon is present in the sky magnifying the genjutsu's capabilities but displays a weakness to daylight, the Getsuyagan would weaken and be unable to cast a genjutsu or cast weaker illusions which gives the target a better chance to break.

Retrieved from "https://narutofanon.fandom.com/wiki/Getsuyagan?oldid=872065"
Community content is available under CC-BY-SA unless otherwise noted.