Not much is known about his physical appearance due to the fact that clothing covers his whole body. The only thing that is known is that he has red eyes. Haru wears a skeletal mask, he also wears a black cloak that reaches his ankles. The hood of the cloak is usually up so that people can't see his hair. For pants, he wears plain long black pants, and for a shirt he wears a long sleeve black shirt. Haru has bandages that go from his elbows to the tip of his finger tips.

Haru is a really mysterious character. No one can figure him out. One moment he is being a hero and the next he is a sadistic monster. His goals are also unknown. The only thing that is known about him is that he cherishes his sister and other mutants.

Haru's intelligence is average for someone his age. His wisdom however is a different story. According to the rumors Haru's wisdom matches Hagoromo Ōtsutsuki. This rumor hasn't been proven but judging from Haru's actions it isn't completely unbelievable.

When, Yuno did some research about the two beings inside of Haru she came across a shocking realization. Yuno came across a story about a young boy who told everyone that a tiger and a dragon were always fighting in his dreams. The boy said that, that's all he dreams about and if he closes his eyes and concentrates enough he can still see them fighting. Sometimes they would change form, but the two creatures would always be opposite from each other. In Chinese  philosophy Yin is shown as a tiger and Yang is shown as a dragon. The young boy had the manifestation of Yin and Yang inside of him and this time, it's Haru that has these two beings.

Haru genjutsu skills are also decent but he doesn't use it often because he favors kenjutsu. The only reason why Haru would even consider genjutsu is if he doesn't have any other options.

Taijutsu is the only other skill besides kenjutsu that he bothered to train in. The reason is obvious, if Haru's taijutsu skills are pitiful then his kenjutsu skills would be as well.

His Kenjutsu abilities are what gave him the famous name: "The Kenjutsu God." His sword skills are perceived as god-like. He always as had a natural aptitude for the ways of the sword even when he was 6 years old. Haru can wield a sword with great speed, power, skill, and precision. It has been shown that he is able to easily cut through a metal beam or destroy a cement wall with ease. Or when he was able to take down 50 shinobi without killing them. Not only does he have great skill with the sword but instincts as well. On top of that, when it comes to swordsmanship it has been shown he has a pseudo-clairvoyance because it seems he always as the upper hand. Even sharingan users deem his pseudo-clairvoyance impressive. His kenjutsu skill isn't limited to just one sword, Haru is able to wield two swords just as easily.

Haru can rapidly regenerate. The limits of his self-healing ability is unknown. He is generally in very good physical shape as their bodies are constantly reverting to healthy state due to this ability.

Haru never ages, and as a result, he stays young forever. However deadly diseases and mortal wounds can still kill him.

Haru's strength far surpass humans and what a normal human can do through training alone. Haru's strength is one of the main reasons why his skill in kenjutsu is so great. The exact limits of his strength are unknown but it has been shown that he can stop a chakra enhanced punch with just one hand.

Haru is able to survive at any temperature without discomfort and he is able to resist radiation to a certain extend.

Haru's physical needs are greatly reduced. These needs include sleep/rest, food, drink, shelter from environmental effects and their lack.

Haru is able to make his tongue grow longer and grasp and manipulate objects.

Haru has extremely accurate senses, allowing them to see, hear, smell, taste, touch and/or feel more than the average human.

Natural And Celestial Energy Detection: As Inhumans adapted to the harsh environment, they developed a unique sense by evolution that allowed them to detect the natural and celestial energies around them.

Part in the story

Haru wasn't always fond of swords and other bladed weapons. In fact, as a child he hated and feared them. When Haru was only six years old he came home one day and saw a sword sticking out of his mother's chest. It took Haru a while until he finally admitted to himself that his mom was dead. After that day, Haru stayed away from swords as if they were the plague.

One day, a traveling swordsman arrived at his village. This swordsman had just come from a different village to give a handicapped boy a second chance. This man, would not only help Haru get over his fear and hatred but he would also become Haru's sensei. This mysterious man taught Haru many sword styles. Including the Cloud Style, Flying Sword Style, Iaido, and Konoha's sword techniques.

On the day of December 9th at 5:00 am, this traveler taught Haru his own sword style. The name of that sword style was "Seiken." It took Haru a month to prefect this sword style and when he did his sensei taught him Rasenringu and Dai Rasenringu as a reward. Soon after that Haru's sensei mysteriously vanished.

Two years after Haru had left Konoha with his sister he travelled to the land of fire to find his Sensei's grave and dig up his Sensei's sword. Haru didn't find the grave, he did however find a rather annoying girl around Haru's age named: Nagisa Rinku. The years following meeting Nagisa would be the most peaceful and happy years of Haru's life. In fact, it's one of the only times when he has felt truly happy.

Usually, Haru would ignore people who annoyed him. But she was different, she wasn't human at all. In fact she was a vampire and she desperately wanted to train under Haru and be with him. Nagisa eventually persuaded Haru by offering to help him take care of his sister.

Haru, Nagisa, and Yuno travelled together and as the days turned into months Haru found himself liking Nagisa more and more. Partially because he admired her power and adaptability. The was another reason of course, but he would try not to admit it to himself, much less say it out loud. Haru and Nagisa's bond grew stronger with each passing day, and as her training continued they would begin to fight together more often.

In the beginning, Nagisa kept her promise and took care of Yuno by herself as Haru went out to do his mysterious outings. As time passed it became more like a family and Haru and Nagisa would look after Yuno together. Even though Haru was slowly opening up to Nagisa he didn't let Nagisa truly know what he was thinking. She tried every possible way to get him to open up, but none of the attempts worked in the beginning. That would change after 11 months of being together on April the sixth. Haru and Nagisa were both on the verge of death on the day and the only reason they survived was due to the fact that they were together. Their enemy was an Uchiha who had the Eternal Mangekyō Sharingan. On that day, Nagisa became the first person in 10 years to ever see a Haru's face besides his sister. Haru and Nagisa were eventually able to beat him when they both used Haru's trump card at the same time. 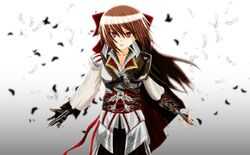 Nagisa's appearance when Haru met her.

Haru without his mask on. 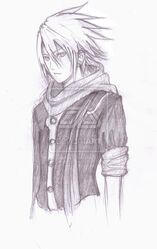 Haru's sword skills
Add a photo to this gallery

Retrieved from "https://narutofanon.fandom.com/wiki/Haru_Ch%C5%8Djin?oldid=833412"
Community content is available under CC-BY-SA unless otherwise noted.