When he was born Suppai had named him after Hashirama Senju, in hopes that he would become as legendary as him. Before he joined the academy, Hashirama had been trained by not only his father but many famous shinobi from the village such as Takashi and Jettoenjin. When he graduated he became a Jonin the following year. In order to master the Lightning Release he traveled to the Land of Lightning.

Hashirama is a very tall and muscular young man with orange eyes. His hair is slicked back, its numerous spiky strands pointing backwards, though some of it falls down on his forehead. He has a distinctive lightning bolt-shaped scar on his right eye. His attire consist of a wine-red, and his coat as black with gray fur trimming.

Much like his father, Hashirama is a prideful man who loves his clan and his village. However unlike his father he bears no hatred toward the Uchiha Clan, he instead respects them and wishes to surpass Sen Uchiha. He also cares deeply for his adoptive brother, Nezumiiro and will sacrifice his life to protect him.

Like Tsunade, Hashirama is a compulsive gambler. with a wining streak due to his good luck. As a result, he has been elevated to a comical status as "Lucky Number Seven"(幸有る番号漆,Sachiaru Bangou Shichi).

As an S-rank shinobi and a member of the Haabu Clan, Hashirama is a very powerful shinobi. Being able to defeat a squad of Kumogakure shinobi.

Although not one of his most known abilities, Hashirama is fairly skilled in taijutsu. He has been seen to deliver fast punches and kicks that leave the opponent paralyzed. 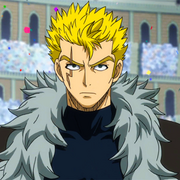