Hisamaru (Kojogin) also known as Hisa the Deft, is the head of the Kojogin clan and formerly the second Village Head of Hashigakure.

Raised during an era of conflict, Hisamaru is proud of his power. On the battlefield he shows no mercy to the opponents he is faced with, unless he believes they will be of some benefit to him later. Even so, he respects strong opponents and thinks of them as motivation to improve his own techniques. Hisamaru values his clan above all else, and would sacrifice anything to ensure their prosperity. His will is strong, and he will endure any hardships even when all hope seems lost. He is deeply affected by gestures of selflessness and genuine compassion by others. Often he will reciprocate these actions if possible. Though he is not easily dissuaded, he will compromise if he believes the result will be more beneficial in the long term.

Hisamaru has long black hair and slate color eyes. He wears a straw hat, white scarf, and black robes resembling that of a monk's, sporting a dark kasaya fastened by a silver ring. Underneath this garment he conceals three of his four bō-staves along with numerous weapon scrolls. He also wears sandals and a pair of white gloves. In his youth he had shorter hair, tied in a ponytail and wore a different straw hat fastened by a string. He also wore dark finger-less gloves and a matching sleeveless haori over sleeveless black and white robes.

Hisamaru was born into the Kojogin Clan and trained to become a ninja at an early age. He was raised to masterfully handle the weapons traditionally used by his clan and often battled alongside them, against clans of ninja enemy for territory and power. The emergence of his Kekkei Genkai prompted him to forge special tools forged from a heavier magnetic metal. His agility and effectiveness in combat, even when encumbered with these weighted weapons, made him the pride of his clan. By the time he reached adulthood, Hisamaru was tempered by the experience of countless battles. This proved essential when the Land of Barriers Daimyo Succession War broke out. The Kojogin Clan and numerous other clans allied themselves in a faction under the previous Daimyo's son Uramasu. Feuding with the faction allied under the deceased Daimyo's other son Ujimasu, Hisamaru continued to take lives. During this war he earned the nickname "Hisa the Deft", for his ability to traverse the battlefield and slaughter enemies without leaving a footprint. Hisamaru faced off against many notable ninja, but forged the greatest rivalry with a young man named Tokazane. Tokazane was the heir to the Rikuyo Clan and allied under the enemy banner, however what truly made him unique was his usage of the Kekkei Genkai Swift Release. Across every battlefield Hisamaru was the only ninja able to consistently match Tokazane's speed. Hisamaru's fightning style greatly challenged Tokazane and the two were evenly matched until their last battle. It was during this encounter that Tokazane's clan, recently allied with the Odei Clan of Mud Release users. Overwhelmed, Hisamaru crippled Tokazane by driving a combination of metal fragments into Tokazane's legs and clumping them at the joints. As Hisamaru tried to retreat, The Odei quickly disarmed him by sinking his heavy weapons deep into muddy terrain, beyond the reach of his magnetism. Doing so while he was mid flight, they caused him to crash into a rock formation and suffer grave injuries. Soon after this battle Uramasu's faction lost the war, and Ujimasu became the new Daimyo.

Hisamaru's clan along with the other survivors of the losing side were forced to relocate into the Ruined Land. These areas were those most damaged by the war and nearly uninhabitable. Though many clans quickly fell into ruin the Kojogin persevered. Low on medical supplies and viable resources, their patriarch ordered treatment of the younger men and women first, at the cost of his own life. This sacrifice allowed Hisamaru and many others to recover with little damage aside from scars. Despite not being an heir or even next in line, Hisamaru was selected to become the clan's new leader. It was a shared belief throughout the Kojogin clan that Hisamaru's battle prowess was a sign of his destiny to lead the clan out of their suffering. Hisamaru worked tirelessly to keep the Kojogin alive, organizing raids to secure food, potable water, and other essential supplies. Even in their weakened state the Kojogin continued to train and hone their skills, making them feared even by clans which outnumbered them. Yet this was not enough to keep everyone at bay, and the clan was forced to stave off attacks from other clans from time to time. When viable, Hisamaru sent ninja to gather intelligence on other clans in attempt to stay ahead of these potential threats. During this time, he was informed of Tokazane's attempts to form a unified village between the clans of their wartime enemies. Worried that Tokazane's ambition would be the end of the Kojogin Clan, Hisamaru feared the worst. When he learned of Tokazane's failure to recruit the Aohiru Clan his hope returned.

Soon after, Tokazane arrived in the Kojogin Clan village and Hisamaru ordered the ninja to stand down. Though others in his clan were disgusted, he listened to Tokazane's offer to help build and join the unified village. Though he was eager to escape the Ruined Land, Hisamaru wanted to ensure his clan could secure the benefits. Commenting on Tokazane’s damaged legs, Hisamaru declared the leader of the unified village would have to be strong to defend such a large target. Hisamaru agreed to accept Tokazane’s offer only if he could become the leader of their new village. Tokazane declined, citing that the other allied clans would never agree even if he personally approved. Elaborating, Hisamaru explained that Daimyo’s approval would be all he required. The Daimyo would give anything to protect such a large investment, and if the Kojogin clan did not join the unified village, then Hisamaru would personally gather the remaining clans to raid it for supplies. In his current condition, Tokazane would be helpless to stop the sheer number of ninja that would be gathered against them without sacrificing his life before realizing his dream. Coming to an agreement, Tokazane offered Hisamaru a promised spot as the second official village head. He declared that one of the other allied clans would be elected as the first leader with everyone’s approval. Hisamaru accepted and the Kojogin clan officially joined. Hisamaru representing his clan, personally accompanied Tokazane’s group to meet with the Daimyo. Hisamaru's presence, and the greater threat of the Kojogin Clan in the new village created tension during the meeting, yet the Daimyo consented in the end. Hisamaru, along with Tokazane and the other Clan Leaders met in the Rikuyo Clan Village do make plans. Selecting the location to construct the village they dubbed Hashigakure, they ordered the construction of many bridges. After Tokazane quelled numerous objections, Hisamaru convinced the leader of the Odei Clan, Shige, to vote for him to take over as Village Head once the first leader's term had ended. Following this, Hisamaru, Tokazane, and the others voted Shige into office as Hashigakure's first Village Head. Hisamaru returned for the last time to the Ruined Land, and led his clan to their new home. Now a permanent resident of the Hashigakure, Hisamaru helped Shige run the village.

The village's success prompted the bitter Aohiru Clan to attack and Shige lost his life in the battle. Hisamaru immediately assumed control and lead the villagers in a counterattack. Using knowledge from the war about the Aohiru's secret abilities, Hisamaru knew exactly how to defeat them and the battle ended in Hashigakure's favor. Due to the swiftness in their defeat once Hisamaru took over, some of the villagers suspected the attack had been a secret plot of to hasten his rise to power. This greatly hurt the reputation of Hisamaru and by extension the Kojogin clan. Some of the villagers requested Hisamaru resign in favor of another leader, though with help from Tokazane, these requests were denied and Hisamaru’s office was secured. To ensure the village would flourish even now that their last major enemy had been eliminated, Hisamaru punctuated his tenure by allowing Hashigakure ninja to accept missions outside the country from other lands. Though a controversial decision it was one he adamantly stood by. Eventually pressure from the village’s officials persuaded him to select a successor and resign soon after. He chose a powerful kunoichi named Hitoe of the Mushoku Clan. Though no longer in charge of the village, he still advises her on political matters from time to time. 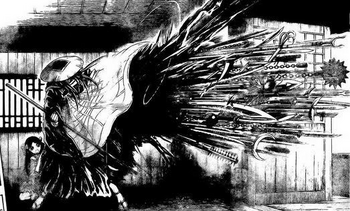 Hisamaru is a master of bōjutsu and incorporates makibishi into his fighting style among other ninja tools. He can unseal a vast number of weapons and tools at once using the scrolls hidden in his attire. With his bō-staves Hisamaru can deflect ninja tools and manipulate the charge of magnetic objects. Among his clan he uniquely possesses the Kekkei Genkai for Magnet Release which he uses to manipulate his weighted ninja tools and float at high speeds by repelling himself against the metals in/on the ground. He commonly scatters makibishi across the ground and harmlessly floats above them while striking his immobilized targets. The interlocking components of his bō-staves allow him to separate and connect them as desired. In this method he can extend his reach, strategically plant them to be repelled off of, and impale them into targets. After piercing a target with his weapons, Hisamaru can pull or push them as long as they remain within reach of his magnetic field.

Though he rarely needed to use either, Hisamaru was shown to be skilled enough with Wind and Earth Release to use them effectively in combat. With earth release he can create weapons and walls, meanwhile wind release allows him to fire earth-shattering projectiles.

Hisamaru is skilled in Taijutsu, as his movement speed and reaction time are exceptional. This was proven in how he was able to match Tokazane's incredibly fast combat pace on many occasions. Years of combat experience allow him to discern the methods behind even secret techniques, provided he has enough time to strategize. As a leader, he was iron-willed, able to prevent his clan from falling apart and later govern an entire village in both times of conflict and peace.

"Glory and territory, that's what we fight for."

"The Old Head gave his life to save me. I swear on mine I'll get us out of the Ruined Land."

"If not for my order to stand down, you would have been killed on sight."

"The Daimyo will do anything to protect his investment."

"War has made me wise to the secrets of their clan."

Retrieved from "https://narutofanon.fandom.com/wiki/Hisamaru?oldid=875255"
Community content is available under CC-BY-SA unless otherwise noted.