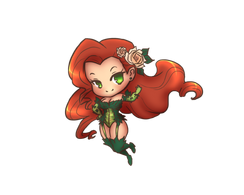 Ikioi Harema (more commonly referred to as Ikioi) is the Kunoichi Head of the Harema Clan and the Fifth Tsuchikage (五代目土影, Godaime Tsuchikage, Literally meaning: Fifth Earth Shadow) of Iwagakure. Considered one of the strongest Harema in history, she has become reputed as Pan (Zen, 全) for her valuable skills manipulating the force of nature (flora) through her hiden plant techniques along with her mastery in the Earth Release nature transformation. She is also very skilled in her clan's Weather techniques and very attuned with the personal summons of her clan.

The successor of Kurotsuchi, she is responsible for reconnecting the war-torn neighbor of the Naruto world to the shinobi lands. In doing so, she has furthered the spread of peace and the influence of Iwagakure across the lands.

The Harema were by nature a clan of wanderers, selling themselves to the highest bidders, creating weather effects in certain places. They could end droughts, start blizzards and more due to their unique power. With their rituals, they always got the job done and survived. They had been doing this for centuries and many believe that they are the reason of the climate in the Iron Country.

These travelers had always been on the move, always moving from one place or another. They never stayed in one place for too long and they never truly had a home. This was rumored to be due to what happened long ago. Once the clan had been ambushed by another which they had hoped to stay with and ever since were no longer safe with staying anywhere too long.

This caused for families to split from other families, as parts of the Harema were contracted to villages where they would make a home. A portion of the clan would settle into the Stone, where they would use their talents to become shinobi of the village. A few years afterward, about 6 years after the war, Ikioi was born amongst these villagers. She would become apart of the next generation and become something unseen to the Harema ever before.

Just like Yota was a powerful child with potential from the Harema, Ikioi was even more powerful than any could of expected. Even more powerful than Yota as a child, many believed if harnessed right, she could become one of the first Harema with the ability to change the weather fully without rituals or emotional restrictions. Like Kakashi once said to Kakuzu, "The next generation will always surpass the previous one. It's one of the never-ending cycles in life." Ikioi fulfilled this in terms of the next generation of Harema.

But while having great potential, great training was also required for her. And while the clan helped her as much as they could, Ikioi had to train herself for the most part in her clan's hiden arts.

However she was the first in her family to officially enroll and graduate from Iwagakure's shinobi academy. While initially having a hard time in the classes due to the foreign nature of the shinobi ways to her family, she quickly caught on. With rock hard determination characteristic of those in Iwagakure, Ikioi made her way through the classes and exams. Her rise from the bottom to one of the top standings in the academy got even Kurotsuchi's attention.

She was placed onto Akatsuchi's team, a war-hero from the Fourth War and a established jōnin. With a Kamizuru descendant (a Aburame hybrid as well) and a explosive shinobi as her teammates, Akatsuchi trained all three of them in the ways of the shinobi. From basic tests to advanced training and missions, the team learned a series of shinobi mindsets, those from Iwagakure and beyond throughout the Shinobi Union.

Ikioi developed the determination and powerful willpower common amongst the shinobi of Stone. The Will of Stone truly became within her, and she learned to embrace it under Akatsuchi. She learned teamwork with her teammates and they became accomplished shinobi even as genin. Working together with their sensei, they took on missions of the A and B rank even before the exams rolled around. Becoming powerful shinobi capable of surpassing all else before, it was easy to recommend them for the chūnin exams. While having been challenged on nearly ever mission they faced, their embrace of Iwagakure culture and use of it in new ways pulled them through. They earned Akatsuchi respect as not only his students but shinobi, that despite being genin could truly become capable of protecting and serving the Stone and the Union.

Ikioi took it upon herself to train in the Hidens of the Harema, the Weather and little known Flora. Through trial and error, she discovered her connection to natural energy. Harnessing it from training with Akatsuchi (from notes given by Naruto), Ikioi became on her way to fully controlling each weather pattern and flora manipulation itself. Though some were still limited to her emotions and they were not super strong as the exams rolled around.

However that did not stop her, and neither did it stop her team, Issen of the Explosion and Hachi of the bees. Using their unique skills, knowledge and teamwork, the exams were easy enough for them. Held in the Land of Water, her team became able to adapt to the environment. Surpassing the first test of knowledge, the field test with them together was not hard as well. However they became challenged by wild animals controlled by a pack of genin, determined to stop them from succeeding. And even worse, they managed to divide Ikioi's team apart. Ikioi was no stranger to battle though and the surroundings were her ally. Finally mastering control of her sunlight powers while cornered and pushed to her limits, she caused a forest fire on the island where they were. Managing to scare off the animals, she eventually forced the genin to run away or defeated them. Regrouping with her team, they narrowly escaped the fire but still eventually passed the last example. Training to control her sunlight powers, the third exam's tournament became easy. While she did not make it to the end, she had shown her talent and uniqueness through her own hidens and prowess, allowing her to be promoted to the next rank, chūnin. Her own teammates had followed suit; seemingly their sensei was a capable teacher.

Ikioi continued to serve Iwagakure after the team was dissolved. Taking on missions with many shinobi, she continued to expand and refine her skills. Training under Önoki and his shield (her sensei) Akatsuchi, she learned earth release while training to master her hidens. Taking all three arts to a new level, she would eventually be promoted to jōnin and continue to protect Iwagakure with her teammates, one of which who had learned Dust Release from old Lord Third and the other had received training from the Aburame.

Her skills for Iwagakure eventually allowed her to join its ANBU and become an ambassador of the village and country at large.

Known for her beauty, Ikioi is known to be an attractive young woman. Characterized by her flaming red hair, it reaches to about her middle back. Its bangs frame her face on either side, revealing the soft features of her face. Fair in skin tone, her eyes are a blazing red, like roses in full bloom.

Ikioi doesn't wear much, in her standard attire. She wears a green leotard, etched with plant designs, that conforms to her ample form. The leotard is a partial one, revealing her ample cleavage and emphasizing her curves. Wide towards the bottom, it is manageable and not too revealing, if that is possible. It conforms with her large hips. Green cuffs circle each of her wrists, and her fingernails are painted in red polish. Her arms are fit and thin, powerful as well. Her legs are also built athletically, made fit from her constant exercise. She wears green boots, that cover most of her shins.

It is also noted this outfit is imbued with chakra, meaning she can alter it at will. The kanji for Blade is also located on her leotard, for the summoning of her special scroll, which is large and green in color. Ikioi is also often seen with plants, usually leaves in her hair, or vines around her, emphasizing her nature theme.

On different shinobi missions, Ikioi can also be seen wearing a form-fitting black jumpsuit, that also has the kanji for Blade on it. This is often accentuated with plants as well. The plants are often used for her techniques if the need arises. She also finds plants to be quite stylish.

As a Harema, Ikioi is quite talented in ninjutsu, especially in her clan hidens. She is also known as a powerful earth release master. Her prowess in ninjutsu is quite impressive, as she has fashioned ninjutsu from observation, such the Chakra Shockwave.

Retrieved from "https://narutofanon.fandom.com/wiki/Ikioi?oldid=755846"
Community content is available under CC-BY-SA unless otherwise noted.