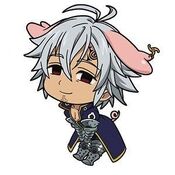 Jashin Ōtsutsuki (ジャシン大筒木, Ōtsutsuki Jashin) infamously known throughout the shinobi world by his forename Jashin (ジャシン, Jashin) is a member of the Ōtsutsuki clan's main family, currently using Zankoku as his vessel. Long before the founding of the hidden villages, Jashin was sent to Earth to investigate the whereabouts of Kaguya and her God Tree. However, arriving several years following her first incapacitation, Jashin remained on Earth to attempt to cultivate a new tree out of her son's chakra.

Prior to their legendary duel, Jashin spread chaos and calamity throughout globe and was regarded as a wicked deity, earning him the moniker Kishin (鬼神, Kishin, Literally meaning: Fierce God). His powers in curses along with his undying ability were unmatched. Despite his devilish prowess, Jashin was inevitably defeated by Sage of Six Paths and was sealed away. Prior to his imprisonment, he manifested his will in the form of an artificial human called Jinzō; who was tasked with cultivating him a suitable vessel before reviving him in order to complete his mission.