Jiki is a very tall woman, with an incredibly toned body, as she's undergone rigorous training throughout her life. She has silky, dark blue/black long hair that cascades down to to the middle of her back. She also has, what one would think, ungodly smooth dark skin. As for her clothing, firstly, her head is adorned by a golden headband with a down-facing, crescent moon as the centerpiece. She wears a full body-suit with see-through mesh, with the only part of solid fabric being over her bosom. She does wear a golden belt with a long, flowing fabric that simply drapes between her legs. Her outfit also includes a cape to help protect against the elements.

Jiki is a very private person, usually only interacting with people when she absolutely has too, unless she's been sent on a diplomatic mission, which is when she eases over any problems and is always diligent to iron out any details and very thoroughly lay rest to any doubts anyone has on any topic in regards to her country and village. She's one of the most bureaucratic people in the entire continent, if not the entire planet, and will constantly nag the Tsuchikage to finish his paperwork, and will even lock him in his office until he does.

She's incredibly tenacious, practically the only similarity between she and her brother, and will let nothing stand in the way of her goals. As well as having an unwavering; unyielding-- an unbending loyalty to her brother, and will do anything to keep him safe, to a fault. She will keep her brother in the dark to some of her unscrupulous dealings, and where her brother refuses to take a life, she will not hesitate, especially if they are deemed a threat or even so much as an obstacle to her brother, or her.

She also happens to be very organized and neat, as well as a germaphobe, so she will avoid all form of physical contact with anyone, including her own family.

Because Jiki is very strict with regulations and traditions, especially on herself, she refuses to address her brother, the Tsuchikage, as "brother" in public, but will address him as "Lord Tsuchikage" or "Lord Thirteenth" to keep up formalities, which sometimes misleads others to think they're not related. But in the rare case that they are alone, she will casually call him "brother", unless she's angry at him, and has had enough of his outbursts or his attempts to run off on his own, she will firmly address him as "Tōji ".

And while her older brother is directionally challenged, she is phenomenal with directions and maps, and can instantly memorize routes, streets, landmarks, and location names. But sadly, she has a terrible sense of time. She often loses herself in her work or research, and miscalculates departure time, travel time, and/or arrival time.

Due to Jiki's very calm and collected temperament, she's rarely seen truly angered. But when she is finally pushed over the edge, it's blatantly obvious that she's furious, and her voice will change into a flat, dry, monotone, with a fear-inducing look in her eyes that could make children run crying to their mothers.

Due to Jiki's relation to the Thirteenth Tsuchikage, even before he actually took the mantle, she was often looked at to see what she would make of herself. Though she didn't take the same type of reputation her elder brother did through brute force, she did manage to pave her own path with sheer tenacity and her prowess in academics, research, medicine, and barrier techniques. Her medical capabilities alone are renown through the entire country, many of her clientele and prospective patients going so far as to travel vast distances from outside the country to see her in hopes of a cure for the most obscure of ailments.

In addition to her other skills, Jiki has shown to be incredibly knowledgeable and adept in terms of barrier ninjutsu, able to identify most barriers along with the nature and mechanics behind them to neutralize them.

While sensors may recognize her chakra due to some minor similarities to her brother's, closer inspection might reveal a subtle, nearly undetectable, difference, her's has an unusual toxicity to it that will affect anyone that siphons it. This toxicity for whatever reason, appears to be completely undetectable by sensor-types, only those affected by able to feel it's effects, even if it's unbeknownst to them the source of their affliction. When sensors pry in too deep to inspect her chakra, they may feel an unsettling shortness of breath, possibly overwhelmed by the young Namazu's sludge-like, toxic, muddy chakra.

Known to possess slightly larger than normal chakra reserves, much like that of a flowing river, it appears calm and serene on the surface, but is truly tempestuous and powerful beneath, capable of eroding even the mightiest of boulders that lay in her path. Her chakra, and her precise control of it, more often than not, have completely overwhelmed an opponent like a mudslide, completely unpredictable, after having been grossly underestimated. Because of the mastery over her chakra, techniques that would otherwise require large amounts of chakra, come through easier to perform for her, with smaller quantities of chakra being drained from her.

Like all Namazu, Jiki posses an above average strength, but nothing comparable to that of her brother's. Trained as she might, she could never hope to achieve his level of power, something she hated in herself, but managed to overcome in other ways. As for her durability, she's damn near indestructible. Jiki's merciless speed training resulted in more than one benefit, granting her an incredible resilience and durability to outperform her opponents during battle. Speed - this is where Jiki's abilities are seen, where her true powers shine through. Jiki trained tirelessly, surpassing any and all her own physical and humanly limits possible to achieve a level of speed unlike any other. All to truly compensate for her own body's inability to perform with brute strength. Because of her calm, and "obedient" nature, her fighting prowess and speed are often forgotten, a grave mistake. A mistake that has easily cost the lives of many.

Jiki is an extremely competent Kunoichi, able to use Earth, Water Release nature transformations, along with Yin, and Yang Release. While skilled and competent in Earth Release enough to hide underground, erect walls and domes to protect herself and others, and also unearth things and people hidden or buried beneath the earth she is admittedly inferior in comparison to that of her elder brother.

Unlike her brother, Jiki is stronger in Water Release than with Earth, using the water as a medium to heal others, create various constructs, and attack by altering the density and viscosity. Jiki is also adept at using water to sense or detect others. By combining her earth and water-based chakra natures, Jiki can use Mud Release. Jiki unlike her brother, is not above using the combined nature transformation to take lives. Aside from its standard use, Jiki has developed the unique ability to bypass a large variety of barriers using the mud she produces as a medium.

Jiki is, to date, one of the greatest medical-nin within not only her own nation, but the shinobi world as well. She is able to easily diagnose anyone around her, identifying their ailments with but a glance. Where most ailments and afflictions that would be deemed untreatable, Jiki treats them as minor nuisances, generally resolving the issue within the same day of discovering it. She has brought many from the brink of death more often than not, making her an invaluable asset during times of war and an object of worship and admiration to those she has aided.

Beyond the standard use and practice of Medical Ninjutsu, Jiki is a celebrated virtuoso in terms of poisons, toxins and antidotes. Though a master at healing she finds her greatest pleasure in concocting various poisons using toxic and poisonous herbs from her gardens, and the venom from the various snakes at her disposal. According to Jiki, there exists no poison or toxin which she cannot cure, and is even known to use poison to counteract other poisons. Jiki has experimented on herself to such a degree that she is virtually immune to nearly any and all poisons, toxins and venoms, her kisses known to induce drowsiness and paralysis.

Where her brother has an affinity for Rhinos, Jiki discovered herself to have a powerful affinity with snakes. Jiki can summon a variety of snakes; ejecting them from her mouth or beneath her cloak, turn the lower portion of her body into a snake's tail for increased speed or mobility, and conjuring them forth as shields or to bind her targets.

Jiki's initial form of compensation for her shortcomings in terms of raw power. Where she couldn't perform like her brother, she had to seek out a different route to her own greatness, and thus, became studious, and diligent in academics, becoming one of the brightest minds the entire Land of Earth could boast about. Jiki's intelligence comes into play perfectly for analyzing, deciphering, and strategizing, not to mention her vast knowledge of the human body, herbs, toxins and poisons, as well as a wide collection of traditional, ancient remedies, and even a unique array of healing techniques. 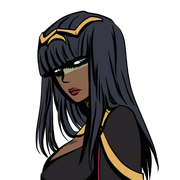