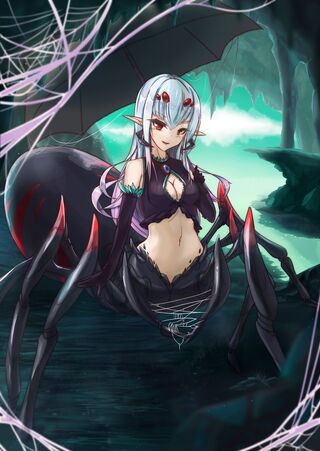 Feel Free to use this species, however, you must research everything about them using the links on this page!

The Jorōgumo (女郎蜘蛛, "Woman-Spider") are a species of female half-human/half-spiders that can shapeshift into young, human, women. They are noted to be incredibly beautiful, as they must use their looks along with trickery and deceit to capture and feed upon their prey. Nature energy runs through them naturally, so senjutsu is their main form of chakra manipulation. Additionally, they also possess incredibly long lifespans, with many of them living for at least a millennium before succumbing to old age. It should be noted, however, that their appearance never changes past it's most beautiful, similar to how a vampire's wouldn't. If one's body was to be at it's most beautiful at the age of 13, then the Jorōgumo would physically remain a 13 year old until they pass. The same would be true if they were 6, 16, 60, or even 600 (although that would suck).

When in their half-human/half-spider form, Jorōgumo can have 6 to 8 additional limbs (spider legs). They also grow 2 pedipalps which can be used like small "arms." Their upper torso remain human.

The largest, main branch of Jorōgumo reside within the Bewitching Silk Forest. However, a smaller, second branch of Jorōgumo left the forest after disagreements concerning how things were being run by Emica, the Spider Heiress. These defectors formed clan Kinudorei and were led by Emica's younger sister: Manjushage. They eventually founded the Silk Forest of Submission, otherwise known as the Silk Forest of Submission.

Each branch of Jorōgumo is capable of their own version of Spider Senjutsu and the techniques and abilities differ between each version.

The position for Jorōgumo Sage, or what's rather known in modern age as Spider Heiress, is a ritual taken place only when the current Jorōgumo leader is on her deathbed. One if her offsprings must drink a neurotic venom that'll make them have the lust and hunger of a pure spider and feast upon the chained down or comatose sage. Once the ritual is complete the new Woman-Spider will inherit the old spider sage's powerful chakra and will along with their eyes changing from ruby-red to a glowing purple-blue with the pupils becoming like constricted pinpricks in size.