Juryou (じゅりょう, Juryou) is a native fox of the Arctic Tribe of Hyōkaidō. A powerful commander of the Four Hundredth Legion, he serves as one of the vanguard of his tribe that calls in the time of war.

Juryou is a very upbeat and chirpy individual with a anonymous aura that gives people suspicious vibes from him, he's very positive and eccentric to everyone and to his enemies in battle congratulating them o land a blow or doing their best before he kills them even to his relatives, acting out like a teenage and partake in parkour exercise and activities then would behave like a man with loads of knowledge and perception of his surroundings many would consider a omen while others a odd-like blessing. 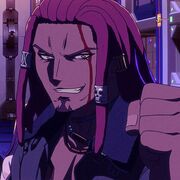