Kawaī was born as the second of four children to a loving couple settled in Kumogakure. As a child, she was always out preformed by her older brother, whom she often competed against to gain the approval of her parents. This led to Kawaī's competitive attitude as she grew older, using her brother's accomplishments as motivation to succeed. Her brother was later slaughtered by a squadron of Kirigakure shinobi during a mission, leaving Kawaī heart broken. With her brother out of the picture, Kawaī's parents transferred the hopes they garnered for him to her, including the position as the heir to the Yotsuki Clan.

Kawaī is foreseen as an outgoing individual, who loves meeting new people. Her exquisite charm in conjunction with her charisma defined herself as one of the most popular students in the academy, bearing the crushes of several male classmates. Above all else, Kawaī is an affectionate individual who cares deeply for the well being of her comrades and village. She is also very competitive, competing even for the silliest of reasons. Spoiled by her position as the Yotsuki Clan's new heiress, Kawaī is used to being the center of attention. 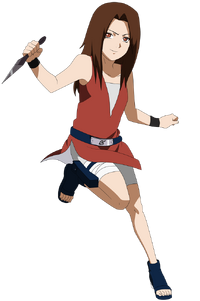 Kawaī has luscious, straight brown hair, large light-brown eyes, and fair skin. She is most commonly seen wearing a crimson colored Qipao dress without sleeves, worn over a suit of bandages. She also wears a pair of tight fitted short shorts beneath the dress, completed by shinobi sandals on her feet. She is renowned for her beauty, a trait she inherited from her mother. During her days in the academy, several older figures requested Kawaī's parents' approval for her hand in marriage, upon the girl's come of age.

Although a sheer genius since birth, Kawaī was often overshadowed by her older brother. She possesses supreme athleticism, and despite her young age, a very lethal first step. As a member of the Yotsuki Clan, Kawaī possesses strong chakra.

As a member of the Yotsuki Clan, Kawaī is proficient in Water Release based ninjutsu. She has shown expertise from a young age, garnering the ability to use techniques such as the Water Release: Gunshot.

Kawaī is also adept in kenjutsu, the practice of fighting using weapons. Her main choice of weaponry remains her brother's Tantō, which she inherited after the latter's untimely death.

Kawaī's brilliance was on full display during her tenure at the academy. As as student, she received prestigious marks, often finishing at the top of her class.

Retrieved from "https://narutofanon.fandom.com/wiki/Kawaii_Yotsuki?oldid=806845"
Community content is available under CC-BY-SA unless otherwise noted.