Kazuko Ryuketsu (流血和子 Ryuketsu Kazuko) was a member of the Ryuketsu Clan. She was one of Konoha's most highly respected and talented specialists, among the greatest in fields such as fūinjutsu and barrier-ninjutsu. A flaming trailblazer, she revolutioned, advanced and added to its practices. Kazuko was a critical individual that protected the village against natural disasters, adversaries, clan disputes, tragedies, and even against her own kin.

She led the Konoha Barrier Team for over 10 years until her passing on Konoha's Death of Ice and Iron, where she died fighting and containing Shizuku Ryuketsu within her own barriers. 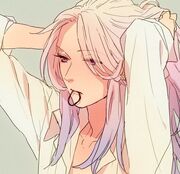