Ken (ケン, Ken) is a shinobi of Konohagakure's Hatake clan. He is an only son of Kakashi Hatake with Mina. He is as genius ninja as his father, but he is playful and doesn't take something seriously just like his mother.

Ken is the only child of Mina and Kakashi. He was born 2 years ago before The Fourth Shinobi World War. His father loves him unconditionally and spoils him. Since that, ken always like to do whatever he wants. And that make him having a bad habit. He doesn’t like being stared at and being a center of the attention. He’s never stand himself out. However, since he is a Hokage’s son and has a good looking, people often pay attention to him. He’s blamed for many times that he’s just a well connected. individual. But he doesn’t care at all.

Since he became Genin, he joined Team 7 having Naruto Uzumaki as a leader. They are very closed since Ken was a little boy. Ken used to train with Naruto occasionally. And that let him know that he can’t beat Naruto ever.

However, he also knows Naruto’s weakness. His teammates: Tsukune and Mibuna really cherish Naruto. It makes their team is so united.

After the mission, Naruto is able to look after his students very well. Therefore, they don’t have any risks. Besides, Naruto willing trusts Ken because he knew Ken’s skills.

He applied the Chūnin Exams to impress his father to be proud of him. Also, he would try to be the winner as best as he can for only his father. Well known that his father is the 6th Hokage, he doesn’t want to damage his father's name. He just only wanted to win the opponent, not to win for passing the exam because he’s inattentive to go a harder mission. Thus, he didn’t use Ninjutsu. He used only the Taijutsu and tricked the opponent with his own aptitude. Finally, he passed the exam with an outstanding character by his fast speed and intelligence. Although he doesn’t want to become Chūnin, he was very happy that he’d passed the test.

After he got the B-Rank mission, he was as a temporary leader because Naruto got another mission. He was almost lose his teammates that time. He couldn’t control himself when he saw his team was in danger. He used to be Shinobi with great sagacious. When he faced to the team’s danger, he couldn’t even think for any plan. He lost his confidence and was under pressure situation. Only think the ways to save his friends’ lifes.

He used all his power to save his friends, but was unable to beat all the enemies. Fortunately, Naruto had completed the mission and came to help them in time. It was because of his father noticed his feelings that he was very stressed with this mission.

Therefore, he realized that he should not work with others. Since that, he didn't live in the village for two years. He tried to avoid his teammates because he feel guilty that he couldn't protect his friends. While his friends never blame him at all. Tsukune and Mibuna continually try to find him. He returned to the village only once a month because he had a promised with his father.

But when he knew that his father needed his ability to help the village, then he decided to come back to the village for his father. Besides, it was the time that Naruto prepared to take the position of the Seventh Hokage placing his father.

Ken is a very handsome. Observing by his physical, he is staid. But in fact, he is very friendly. Many people like him, yet also hate him. But he doesn't care about other's gossip. He cares only people who are good to him. Ken Hatake and his friend He alway flirting with girls.

He is a kind of cheeky and playful person, not serious about anything. Well known as being lazy and lacking of patience. He doesn't like doing missions than hanging out with his friends. Also, he is very straightforward. He expresses directly to everything. He's never lie and doesn't like lying. (Except when he's doing the mission.)

He is curious and likes to learn and interested in everything as same as a kitten naturally.

His bad habit is he likes to flirt with girls, but doesn't take it serious to anyone of them.

Ken looks like his father with the same hair color and personality. His hair color is darker than his father. He has silver short hair. With fangs on both sides. Red eyes and white skin. His eyes are beautifully remarkable which are derived from his mother. His face resembled as his mother while his personality resembled his father.

He always acts calm, but he is actually playful which it opposites to his character.

Ken likes to wear a T-shirt inside, then wear a jacket outside. He especially likes wearing a hood. He often rolls up his shirt sleeves to be comfortable. He wears the Forehead Protector on the right glove (He used his right glove to block weapons). Most of his clothes are black and dark blue. He puts on a belt which has a bag attaching behind in order to store the ninja equipment and weapons. He sometimes hides the weapons under the clothes.

Ken is a genius like his father. But he usually didn't show anyone his potential because he knew that it will increase more work. Only his father knows well about his abilities because he trains with his father all the times. He loves and highly respects his father. He likes to tease his father and becomes a habit. So, they both are very close.

Ken has a very good memory. He can learn things quickly. Because of his laziness, he always thought for the shortcuts to complete the mission quick. Sometimes he doesn't even have to deal with enemies at all. He is remarkable as the fast speed and his intelligence. But he's not very confident with them. He just does everything by his instinct. That's why he likes to do a mission alone. Since he decided so sudden; plus, without plans.

Having teammates can make him worried and distracted. It's miserable that if he was the team leader, he would had been a very effective leader.

Ken is intelligent and genius like his father. Besides, he has a very good memory. He is curious and likes to find out answers. He's able to learn things quickly. And he is a very sharp-witted person. Ken's grades are at the middle level. That's because of he wanted them to be like that. If he got the full scores, he knew that he will be focused and he will had more works.

When he was on a mission, he quickly think resolving problems without any form. So, It is difficult for the enemy to know his plan. In addition, because of his playful can lead the enemy to be careless.

But his weakness is that he can't be a leader. Because he cannot work under high pressure and expectations from the others. When he is has a mission alone, his decision will be so quick and effective due to that he can hold the mistake and the risk by himself. But if he has to take the teammates' lifes, he becomes lack of confidence in his decisions. He can't take someone's life at risk. 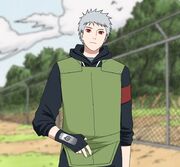