Mai Uchiha (うちは舞, "Dance Paper-Fan") was a Jonin kunoichi from Konohagakure. A skilled member of the Uchiha Clan, she was a kenjutsu specialist that used the powers of Fire Release to amplify her Kenjutsu and Shurikenjutsu abilities. In addition to her Sharingan, she also had access to certain Yin Release genjutsu. She was most famous for her ability to heat up metal.

Listen to Mai's theme while reading.

Among the Uchiha, Mai was somewhat of an oddball, as she much less affected by her clan's infamous Curse of Hatred. However, it wasn't that she was a kind and nurturing woman who rose above her fellow clan-members; in fact, it was quite the opposite. Unlike most members of her clan, Mai was an incredibly selfish and self-centered individual, so much so that she rendered herself incapable of awakening a Mangekyō Sharingan due to her inability to feel enough love for others. Essentially, her own selfishness prevented her from falling into despair and traveling down the same dark road as many others of her clan.

With regards to her selfish tendencies, Mai did not care an ounce for most other people. She had no qualms about stepping over others in order to get what she wanted. While she wasn't really a backstabber, she rarely went out her her way to help others in need; if a comrade was injured or fell behind on a mission, she felt no remorse for leaving them to die: Those that fell behind, stayed behind. She also had little issue ignoring orders she didn't agree with and didn't hesitate to talk over others—even her superiors. It was a rare occurrence to see Mai being respectful, and such displays were usually only for show.

Mai was always regarded as very flirty woman, often commenting on the appearance of individuals she found attractive. Finding both men and women tempting, she enjoyed the intimacy of both sexes, and thus, considered it a waste when she had to kill someone she considered to be pleasing to the senses. Unlike most women of her time, she wasn't afraid of embracing her sexuality and didn't shy away from making comments about herself or others. However, despite her promiscuous and bold nature, she tried to never grow too attached.

A woman of shorter stature, Mai felt insecure about her height, thus prompting her to wear heeled sandals. This was attributed to her desire to remain superior to other women, and on the same playing field—if not higher—than men. When other's commented on her height or her choice to wear heels, she became very defensive and irritable. It was said that she once killed a man over him teasing her about it; the rumor was never verified, but most who heard it could believe it.

Like most Uchiha, Mai was prideful and arrogant, although she seemed to be a special case—her pride oozed from her existence. She was incredibly cocky, mean, and admonishing. She viewed herself as superior to others in every aspect: Beauty, intelligence, combat skills, copulation—anything she could think of. When given the opportunity to showcase her abilities, or to demonstrate her beauty, she never passed.

Mai was a petite woman of shorter than average height at 154.94 cm (5'1") tall. Light, skinny, and fit, she weighed around 44.90 kg (99 lbs.). Her arms, legs, and stomach were all tight and smooth, and she was noted to have a large bosom; she was in excellent physical condition, as was required of a kenjutsu master and effective kunoichi.

A member of the famed Uchiha Clan, Mai had light skin and a fair complexion. Her clear, youthful skin was contrasted by her onyx-black eyes. When her Sharingan was activated, her irises turned red and three black tomoe appeared. In addition to her skin and eyes, her straight, jet-black hair was worn in a ponytail with two strands framing her face; on occasion, she wore her hair loose at a shoulder length.

Caring deeply for her personal beauty, Mai liked to wear makeup to further enhance her natural beauty. She liked to use black eyeliner and mascara to accentuate her eyes; she even wore red eye-shadow. Additionally, she liked to wear crimson-red lipstick. On occasion she also painted her nails crimson-red, but was typically seen without any.

With regards to her choice of clothes, Mai wore a very revealing outfit, akin to that of a dancer. On her legs she wore a red slit skirt with a white sash, a matching red bra-like top with white trim. Exposing her midriff completely, the strapless top accentuated her bust and exposed her bare shoulders.

On her feet, Mai wore a pair of open-toed, strappy black sandals with high heels. These heels added a few inches to her height, making her appear taller than, or equal in height, to most women. She never wore a headband.

Visible on the side of her leg her skirt wasn't covering, Mai had a ninja tool pouch strapped to her upper left leg. In it she carried her various ninja tools, as well as two small summoning scrolls, one of which contained her twin dao swords.

Mai's weapon of choice, her twin dao swords were single-edged, one-handed broadswords. The identical swords had silver-colored blades, brass fittings and guards, as well as red cord wrappings around the hilts. At the end of each sword's pommel was a red tassel.

With regards to her abilities as a kunoichi, Mai is a kenjutsu-expert, specializing in the use of her twin dao. She uses the power of her Sharingan, as well as Fire Release and Genjutsu, in order to amplify the effectiveness of her kenjutsu abilities. She prefers a close to medium distance of engagement.

As a member of the infamous Uchiha Clan, Mai possessed the gift of the Sharingan: Her clan's Dōjutsu and greatest source of pride. During her life, she was regarded as a proficient user of her Sharingan, although her abilities with it were only average; unlike those in her clan who had evolved their eyes into the sought after Mangekyō Sharingan, Mai's own Sharingan was only able to manifest three-tomoe, which was still considered an enormously powerful tool regardless. Like all three-tomoe sharingan, her eyes enabled her the use of certain, profound abilities.

The first gift of the Sharingan, the Eye of Insight enabled Mai to perform a number of feats typically unavailable to the average shinobi. She could see chakra, as well as determine its color and identify it through obstructions to a limited degree. She also had enhanced clarity of perception, able to witness, analyze, and decipher even the smallest movements. She could even copy most ninjutsu, genjutsu, and taijutsu she saw—able to replicate them later herself, although she was mostly limited to fire release and genjutsu techniques, as well as basic taijutsu. There wasn't much sense in her copying kenjutsu inferior to her own, at least, in her own opinion.

The second gift of the Sharingan, the Eye of Hypnotism enabled Mai to use Genjutsu: Sharingan, a technique that allowed her to cast genjutsu by simply making eye contact with her opponents. One of Mai's applications of this technique was through the use of Coercion Sharingan, in which she'd visually place a genjutsu on an opponent, causing them to witness a terrible nightmare, similar to the Demonic Illusion: Hell Viewing Technique.

A kunoichi who's fighting style revolved around the use of her swords, Mai's taijutsu skills weren't nearly as refined as her kenjutsu abilities. Even so, she was far from incompetent with regards to her hand-to-hand capabilities. With both of her hands usually occupied due to their dedication to her sword play, Mai frequently employed the use of her legs in the area of taijutsu.

With her legs and feet, Mai danced across her battlefields, artistically and beautifully incorporating kicks into the the rhythm of her kenjutsu performance. She showed enough precision to be able to consistently land aerial, spinning kicks, as well as leap onto and push off of the shoulders of her adversaries. While it wasn't all-too often seen, she occasionally released bursts of flames from her kicks, which amplified the lethality of those kicks; the sudden flames disguised other movements, such as follow-up kicks, or sword techniques.

As an Uchiha, Mai was credited with being able to copy her opponents' taijutsu, although she rarely used other people's techniques or fighting style, as they typically didn't mesh well with her own approach to combat. However, that's not to say that she never copied the physical movements of others. Even if she only saw a dancer perform once, she would be able to replicate their movements perfectly at a later point in time, after minimal training. So instead of copying individual techniques, Mai found herself copying the different ways people moved.

Supplementing her skills in kenjutsu, Mai's ninjutsu capabilities were nothing to be scoffed at; her ability to heat up metal will fire release gained her much recognition within Konohagakure. Aside from fire release, she was also capable of basic Fūinjutsu and summoning-based Space–Time Ninjutsu.

Like most shinobi, Mai is more than capable of using the basic Clone Technique, as well as the Transformation Technique. Like many Jōnin, she can also perform the Shadow Clone Technique. She can also increase her speed for a short period of time with the Body Flicker Technique; she is noted to be faster than the average user of this technique, and leaves behind small wisps of fire when she performs it. Whenever she uses the Body Replacement Technique, she likes to substitute herself with red camellia flowers which burn into embers. 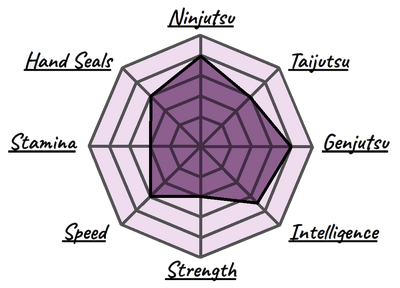