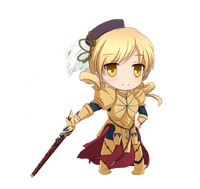 Nasuka Uchiha (うちはナス科, Paper Fan Nightshade) is a jōnin-class kunoichi of Konohagakure. A member of the highly pedigreed Uchiha Clan, Nasuka was set from the start to be a jewel. She was a boisterous child, a star during her years in the Academy. However, despite her one-way ticket to stardom, she liked to be with the common people. She constantly visited the orphanage in her village, providing comfort to the children that did not know feelings of love and did not know what parents were like.

Despite her calm and caring personality, Nasuka does have an evil streak. Her alias of Nasuka of the Demon Eye (美里のナス科, Magan no Nasuka) emphasizes her ability at using her birthright, the Sharingan. She also has a second moniker, one she earned during her missions, Flame Dragon Queen (炎龍王妃, Enryū Ōhi), a testament to her mastery over both the Fire Release, and later on, the flames of Amaterasu.

Retrieved from "https://narutofanon.fandom.com/wiki/Nasuka_Uchiha?oldid=808280"
Community content is available under CC-BY-SA unless otherwise noted.