Orochi Uchiha (Great Snake Fan, 大蛇-うちは, Uchiha Orochi) is an Uchiha, and one of the last remaining members of Madara's branched splinter. Through many trials, this man has found himself in many altercations with the Leaf, and since then, his Curse of Hatred has spawned forth, becoming hell-bent on taking down the Village Hidden in the Leaves.

To do so, he has gone through the extremes of achieving an Eternal Mangekyō Sharingan, as well as teaming up with the Rain to achieve his goals. Now loyal to Ame, he awaits the day he can avenge his family, and himself, against Konohagakure.

But for now, aside from being the new Avenger of the Uchiha Clan, Orochi serves on Ame's Military force, under Raido himself. He also implements torture and interrogation of prisoners, all for the good of the Hidden Rain Village. 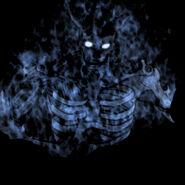 Orochi using Ama.
Add a photo to this gallery

Retrieved from "https://narutofanon.fandom.com/wiki/Orochi_Uchiha?oldid=806471"
Community content is available under CC-BY-SA unless otherwise noted.