Otogakure's Anbu Black Ops are covert operatives of highly skilled shinobi that are dispatched by Orochimaru, who ultimately reestablished Otogakure as a legitimate shinobi village after the Fourth Shinobi World War. Once the village is established, Otogakure Anbu protect the Land of Sound and worked closely with the Peacekeepers

Otogakure Anbu was founded after the Fourth Shinobi War. The groups earliest missions were mainly espionage and intelligence-gathering assigned by Orochimaru in hopes to gain leverage on the Five Great Shinobi Countries. Many of the successes helped Otogakure accumulate a great deal of wealth and political influence to eventually re-establish it as a legitimate shinobi village in the eyes of the Shinobi Union.

Originally, Otogakure Anbu was made up of only ex-anbu from other villages looking for extras wages. With the formation of the Shinobi Union, many ex-anbu and hunter-nin skilled shinobi were out of work. The Shinobi Union accepts missions from clients and forms a team from all its member nations' shinobi who are found to be most suitable for the mission. Such a system was allegedly to provided equal opportunity to all villages, but the need for Anbu and Hunter-nin skilled ninjas began to decline rapidly. With Konogakure spys constantly watching him, Orochimaru needed a team of ninja to gather intel around different nations in order to shift the balance of power in Otogakure's favor.

Once Otogakure is established, many of the original members formed the official Anbu for Otogakure and the entire Lad of Sound. Shinobi are hand picked by their village leader, for their individual capabilities and special skills. Age, background, gender, or previous rank bear no significance in this decision. The assignments that they conduct to protect the village from exceptional threats include high-risk infiltration into enemy territory, dealing with extremely strong ninja, tracking, surveillance, interrogating enemy ninja to learn information and missions requiring specially trained ninja. Because Anbu are so vital to the village's operations, they cannot be arrested by the police without a warrant. They protect the village from exceptional threats, conduct high-risk missions into enemy territory, and deal with extremely strong ninja. Some ANBU serve as interrogators that probe the minds of enemy ninja to learn information valuable to the village.

Otogakure's headquarters is a stronghold that is built in the original location of the former headquarters of Otogakure. It has two markings on it reminiscent of a snake and what appears to be a snake's skull on the top-most part. This is where Orochimaru returned to after Hiruzen Sarutobi had sealed his hands and he remained here while he experienced the adverse effects of his rotting hands. Many believed the hideout to have been being destroyed prior to Fourth Great Ninja War, but the underground facility remained fully intact.

This team is responsible for the advancement and proliferation of scientific ninja tools, weapons, and technology amassing and further refining it well beyond the capabilities of even Konohagakure and Kara. 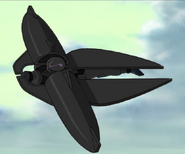 Infiltrate The Land of Waves:

The Tobishachimaru (飛鯱丸, Tobishachimaru) is a flying ship designed by Tazuna and created by the Land of Waves' carpenters. It was expected to be the first in a fleet of flying ships that would revolutionize the transportation of goods between countries. Orochimaru hires Team Fue,(who would later become founders of Otogakure Anbu), to steal the blueprints of the ship. Arikurin silently moves ventilation ducts so he can move around the ship to gather information unnoticed, and Fujina uses Secret Technique: Insect Gathering. Arikurin notices members of the security detail confront a different a passenger and she remotely freezes them to death. At the same, explosions begin to go off as Tobishachimaru is hijacked by the Ryūha Armament Alliance. The ship begins to sway from all the damage it's received and a fire breaks out. During the course of the hijacking, Team Fue is able to find the blueprints to the vessel before the ship crashes in Kusagakure.

Such a disastrous first flight prompts the Land of Waves to abandon the project, allowing Otogakure pick up the project to gain political power. Otogakure versions of the airships are seen flying above Konoha in Boruto: Naruto the Movie.

Because Kusagakure is skilled in diplomacy, a trait they constantly use to read the movements of other countries and stay one step ahead of them, Orochimaru orders Arikurin and Fujina to obtain any information that can be used as leverage against Kusagakure. 5 Anbu are dispatched from Otogakure to rendezvous with Arikurin and Fujina in Kusagakure. The 7 are able to sneak into Hozuki castle due to the damage from the crashing of the Tobishachimaru.

A group of 5 Anbu attempt to kidnap Ōnoki after he departs Shikamaru Nara's house after a few games of shogi. The 2 body guards are easily defeated. Onoki summons earth golems to assist him in battle. Anbu trade blows with golems until they are defeated. Onoki prepares for a fight to the death in order to stop the Anbu from capturing him. Arikurin finds himself at the receiving end of Onoki's Dust Style attack and appeared to had been atomized. But Arikurin is revealed to have been saved at the last moment by using his Sound Release: Body Trill Technique, while that happens Onoki manages to kill an Anbu in combat. However Onoki gets exhausted and is revealed to be a sand clone, shocking the Anbu. Flying above the remaining 4 Anbu, Onoki prepares to let off a massive Dust Style attack but is caught in a pyramid-like chakra cage which will slowly constrict as the user moves his hands closer together called the Curse Mandela. As Onoki struggles to get out of the Curse Mandela, Hayato Orochi uses the Binding Snake Glare Spell technique to summon a snake out of his sleeve towards Onoki. As the snake flies towards the contricted Onoki the Curse Mandela technique is cancelled and Onoki is struck by the snake. The snake coils around Onoki, contricting his movement yet again. The snake bites down onto Onoki's neck and he falls unconscious and falls to the ground, now able to be freely kidnapped without resistance. The Anbu Agents able to skilfully probe the mind of Onoki before Arikurin erases his memory of the battle.

When word gets out that more than a hundred Konoha, Kumo, and Kiri shinobi have gone missing, Orochimaru has the Anbu find information about the Dark Thunder Group. Sasuke along with Orochimaru, Arikurin, and 2 other Anbu go to meet En Oyashiro at the Coliseum, a notorious kekkei genkai collector. When meeting with En Oyashiro, Orochimaru reveals to him that Sasuke is a kekkei genkai owner himself, causing Sasuke to be forced into participating in the tournament. This allows the 3 Anbu agents to pose as shinobi fighting in the tournament. Sasuke defeats everyone and in the chaos, Oyashiro is able to escape unnoticed, with the help of an Anbu agent, and meets up with Orochimaru.

When Sasuke finds and delivers the missing Kumo shinobi to their village, 3 agents are able to infiltrate Kumogakure posing as rescued shinobi. The Anbu team is able to find the Raikage's office and begin to look for information that could be useful to Otogakure. A is able to sense Shimora Aburame's insects and notices the Anbu's presence. This causes a battle to start.

Arikurin had difficulty breaking through A's Lightning Release Chakra Mode, with his Shindo Tando only managing to cause a minor wounds to A. A went on the offensive with his Liger Bomb but Arikurin was able to defend using his Twelve-Tone Technique. In his growing rage, A ignored this and attacked through the after-images all at once with massive amounts of speed and hit Arikurin in his left shoulder.  A believed that he had landed a fatal hit before realising that Arikurin’s genjutsu tricked him into thinking the attack was successful. Arikurin’s apparent critical injury disappears  because caused himself to be caught when he attacked all of the after-images at once, releasing the sound energy. Alseep, Otogakure Anbu begin to extract political information related to cloud, from the Raikages mind.

Not long after, C and Darui arrive because of the commotion. While the Arikurin continues to extract information, Kumo Chinoike & ____ are forced to stall. When they arrived, C launched an attack with his Lightning Release: Lightning Illusion Flash of Lightning Pillar technique to blind Arikurin and his team, creating an opening for the Darui to attack. When Darui activated his jutsu, the attack landed on the pillars, causing the ceiling to come crashing down on Anbu, Raikage, Darui and C. In the midst of the chaos, the Fourth Raikage awakens, and while in his Lightning Release Chakra Mode, runs towards the anbu, attacking at maximum speed. Arikurin spins rapidly, and attempts to repel the attack, creating a protective shield using his Sound Release: Vacuum Palm Rotation. A's speed however is too fast, and he is able to pierce through the defense and hits the Anbu members, knocking them all back in various directions. The blowback from massive attack hitting the shield shatters the walls and windows of the office.

Infiltrate Iwagakure: vs. The Land of Earth

2 members of Kona Anbu and Otogakure Anbu infiltrate Iwagakure with help from Shikamaru Because getting into Iwa unnoticed would be difficult even before the current riff with Konoha, Shikamaru meets with the Third Tsuchikage to draw some ninja away from Iwa, thus making the mission easier. They discover that the village's ninja are preparing to invade the Land of Flowers under orders of the Land of Earth's daimyō.

After Otogakure dealt with series of thefts in smaller nearby villages thanks to thieves, Otogakure Anbu were dispatched to gain any intel possible. They concluded the press eve of an Ice Kekkei Genkei. Later, Arikurin investigated Konoha Bank being robbed by the Byakuya Gang with Kōtarō Fūma after noting the similarities between the thefts and the robbery. Later, after the thieves spread lies and orchestrated a protest against the Kaminarimon Company, 2 Oto-Anbu and Arikurin were tasked with deescalating the crowds after it was discovered genjutsu was behind the village protests.

Otogakure Anbu were assigned the task of investigating the wreckage of an airship crashed on the outskirts of the village. This team was lead by Arikurin.

The standard of black clothing, a black flak jacket with purple accents, purple arm guards of various sizing, black gloves, ninja sandals with spikes for traveling into mountainous regions, three ninja pouches on their back-waist and a purple headband with the symbol for Otogakure. . Squad Leaders often wear black cloaks over their standard uniforms, and subordinates may wear white or tan cloaks. Most of them carry a sword, which is usually strapped to their backs.

Most Anbu wear some kind of mask to conceal their identities like the Konoha Anbu who wear animal-styled porcelain masks, with some opting for more menacing-looking creature. Under the mask, each members ranking can be known based on the color of their happuri-style forehead protector that frames their face similar to that of Tobirama Senju.

Anbu information and screenshot from Narutopedia and Naruto Shippuden

Oto Anbu is based on Suna Anbu attire

Other masks credit to Mizuki-Cho