Raido Namikaze is a ANBU hailing from Takigakure (Sigma). He is also known for his Blood Release, from the Ketsueki Clan_(Sigma), and speed from the his mothers direct heritage of the, Namikaze Clan, allowing him to lead the Namikaze and it's people.

Raido was one of the many blessed. From youth he had both of his parents wealth, he never had anything to about. His father, was known other than Killer B. For that, constantly forced himself to train, so if ever needed, Raido would be able to protect his family. This was later the result of him joining the academy. Raido, became the youngest in Kumogakure history, to graduate. Within a matter of weeks, he was placed on a four-man genin squad, where he was thought to have excelled there. After the Fourt War, Raido's home in Kumo was destroyed, and he and his mother left, to begin looking for new settlement. They would soon stumble upon Takigakure, were it had instantly been decided to be their home. Living would be good, and Raido would soon enroll into Taki's system, placed on a new three man squad of genin, then promoting to chūnin.

Many say he's laid back. Other's say he's a goof off. But to his parents, the ones that know him best, say he's the average eighteen year old. Unlike his fellow co-worker Sigma, and the man they guard for, Shingi, Raido's persona is actually considered serious. But because of his neutral persona, he is often throw in the the middle of Sigma and Shingi's joke contests, judging who's the winner.

Raido, however was the one to always be on the training field to get better. Which is most likely where his "Eye for an Eye" followings come from. Not once, would Raido allow his opponents to get away, without evening the score. Though, despite a feeling, Raido has adapted to his emotionless persona. His emotions came from foes who'd power were greater than his own. Infact, it was a feat he fed upon. He always seemed to acknowledge his opponents, never downgrading them, even when he knew he was the far more superior, he'd even propose his opponents about their abilities. When Raido encountered the patriot of Taki, Raido knew at his current level he wouldn't be enough to stop him[1], Raido even went as far as telling the man so. But, when the man spoke negativly of both the village and the Namikaze, Raido entered a killing state.

Raido, showing his need to get stronger.

Raido showing that he doesn't care how large the obsticle is. 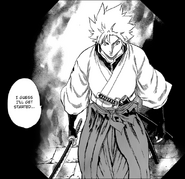 Add a photo to this gallery

Coordination: Raido has always had an exceptional amount of skill in coordinating his body and balancing himself in order to gain the upperhand in combat. One of the first showings of this was within the Tengen School while he fought against Iruka and two other Konoha Jōnin and moved his body to dodge all of the attacks with great balance and skill. It has only gotten better since then, using his bodies balance to go up against Sigma Uchiha who had incredible abilities in the use of his spear and even used the first Lightning Release Armour, Chidori to counterattack an extremely powerful spear slash from him and also used a new technique with the Lightningand Shidensen in order to create an extremely powerful new attack. He also mastered Kashitarou's needle training and did an extremely fast double slash without knowing what he had done. After the fall of the patriot, Raido has shown a tremendous amount of balance even against equilibrium users and defeat them without much effort and go against others who showed much greater prowess than they did, and was still outmaneuvering them in most of the fight until he used his trump card. Within his battle against Suigetsu, Raido showed a new level of coordination which he felt the entire movement of his body and could control it to a greater sense. He is currently trying to master that feeling.

As a man born from Kumogakure, Raido specializes in the Lightning Release. Since he was a small child, he displayed the ability to create diversions using lightning. As he grew older, he began to show an ability to use higher techniques. One at which as the capability of breaking through rocks, using just Lightning Release: False Darkness. Raido has recently shown enhancement for this technique, as he is able to shot the lightning from just the tips of his fingers. Raido is a specialist in the Lightning Release. Day in and day out, he'd train none stop to achieve complete perfection. Though one day, he'd try for a new approach, coating his body in Lightning, therefore forming a armor. Seeing as to lightning being his affinty nature, he'd like to make a defense of it. Over months and months, Raido would find himself failing to achieve his "armor". After evaluations from both Shingi and Sigma, they were able to determine his fails, and mishaps. Raido learned that he had to push his physical prowess, to not only create a defense, but create a speed. In-fact, from his knowledge, of the former Raikages, that both A and the Third have technique's at which he'd want to achieve.

From what he noticed, a used his armor as more of a speedy, offensive, perfectly defensive technique. Learning from a former Kumo-nin, Raido was told that the Raikages "electrically stimulate their nervous system". With-in the next year, months before Ame's Chuunin Exams, he was able to master the well-known; Lightning Release Armour.

Retrieved from "https://narutofanon.fandom.com/wiki/Raido_Namikaze?oldid=850544"
Community content is available under CC-BY-SA unless otherwise noted.