Sexy Technique is the Transformation Technique that Naruto Uzumaki created this technique in order to play pranks on men. The user transforms into a beautiful woman, with special attention given to the woman's figure, breasts, and waist. When Naruto teaches this technique to Konohamaru Sarutobi, Konohamaru initially struggles to take an attractive form; in the anime, Naruto helps him improve by having him look at naked women. With practice, Konohamaru is eventually able to use this technique effectively, though Rin no Sho describes his version as not having the same "wow" factor as Naruto's

After Naruto returned to Konohagakure in Part II, he bragged that he has developed the "new-and-improved" Sexy Technique, but was punched into the distance by Sakura before he had the chance to perform it.

It's the second form of the basic Sexy Technique used by Samuel Nakaoka the Second. 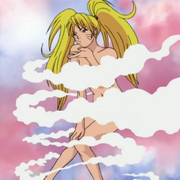