The Six Paths Power (六道の力, Rikudō no Chikara, Viz: Sennin Arts) is a brand of unique abilities used by Hagoromo Ōtsutsuki and granted to several of the transmigrants of his sons; Asura and Indra. Throughout the ages, these abilities have always been separated into two distinct powers; Ninshū and the Six Paths Senjutsu. The Rinnegan is also considered among these powers. Regardless of which power is obtained, those who have obtained Six Paths Power will gain the marking of a Sun if they have inherited the Sage's "Truth" (事実, Jijitsu) or the marking of a Moon if they have inherited the Sage's "Ideals" (理想, Risō).

According to Sasuke Uchiha, the powers used by the Sage of the Six Paths involve a very special, refined, and unique chakra dubbed the Six Paths Chakra (六道のチャクラ, Rikudō no chakura). While the contents of this chakra are currently unknown, Sasuke notes that this chakra is needed—specifically—to harm the shadows created by Limbo: Border Jail and other similar techniques, indicating that this chakra is, in fact, separate from regular chakra. Konan has noted that the combined bloodlines of the Senju and Uchiha Clans comprise this power. Hagoromo himself later elaborates that his chakra is divided evenly between the bloodlines of Asura and Indra and that combining such power results in his unique chakra.

Thus far, there are only a few known applications for this chakra;

A similar chakra can bring forth the Teiōgan in the descendants of Ryun Uchiha.

Several individuals—Hagoromo, Madara Uchiha, and Obito Uchiha among them—have been in possession of both unique abilities granted by this skill. However, Hagoromo clearly defines two distinct arts born from Six Paths Power. Only two individuals, however, have been able to bestow this power upon another: Hagomoro himself and his transmigrant, Ryun Uchiha.

Sigma Uchiha, while not born the transmigrant of Hagoromo, was able to gain access to these unique powers after his hexagram absorbed the essence of him.

Hagoromo exemplified his teachings by distributing chakra meant to "connect" people's spiritual energies with one another. It would allow people to understand each other without communication and would allow them pray for each other's safety in a concept he called Ninshū (忍宗, Shinobi Sect). However people didn't use the chakra to connect with others, but to instead connect their inner spiritual and physical energies together. They kneaded their inner chakra to amplify it and transform it into modern-day ninjutsu. In the end, they ended up using their chakra in battle, just as Hagoromo's mother, Kaguya Ōtsutsuki, did.

Likewise, Kaguya's transmigrant, Seireitou Hyūga, who also inherited the ability of Ninshū, would go on to repeat the perversion of his ancestor; using Ninshū in a way to bend all of nature to his will and force it to obey his every command.

The Six Paths Senjutsu (六道の仙術, Rikudō Senjutsu) is a special transformation, similar to modern Sage Mode, which grants its user a unique form of senjutsu when used in tandem with the chakra of the tailed beasts. This senjutsu is able to perfectly incorporate a tailed beasts' skill into its host's senjutsu. Additionally, it seems to have few to none of the drawbacks of an average Sage Mode.

After awakening the Rinnegan and having mastered senjutsu, Ryun Uchiha, a transmigrant of Hagoromo, can advance the form of his unique Six Paths Mode further, creating a haori out of a mixture of Myōbu's chakra and his own senjutsu chakra. This haori is complete with magatama markings around its hem and Hagoromo's symbol on its backside. Ryun also gains a moon-like marking on his forehead, a symbol of the ideals he inherited from the Sage. The users of Six Paths Senjutsu are also able to use the unique Truth-Seeking Balls, which can negate all ninjutsu (though, ironically, senjutsu can stop them).

In this form, Sigma’s body tone is heavenly increased, gaining a more ripped structure of his tone. His hair, is extended out, longer that his original length, signifying his levels of strength. Around his body, is an aura, with sparks of chakra, constantly flickering like thunder. This form, is extremely related to his special sage mode, and has the ongoing power of his chakra mode. This appearance, was later confirmed to be his "complete" form. 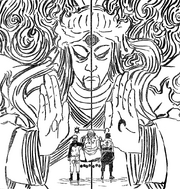