Sound Release: Vibration Control is technique that uses Sound Release to control high concentrations of chakra, sound-waves, and airwaves channelled from the user's hand. It is the primary jutsu of Arikurin.

The user releases chakra, sound-waves, and airwaves from their hand's tenketsu points and compresses it with vibrations, in order to keeps its form and shape.

Arikurin has extensive knowledge and training of the Gentle Fist fighting style, which takes advantage of the Byakugan's piercing vision to strike at the opponent's chakra system directly, constricting or cutting off their chakra flow from only minimal contact. Because the chakra pathway system is closely intertwined with many of the body's major organs, debilitating and even fatal damage can be done just as easily. While Gentle Fist strikes are by default difficult to defend against, Arikurin's usage of sending vibrations directly to the opponents bones upon contact, makes his style especially effective.

This allows the user to sculpt their respective chakra blades into various rudimentary weapons that extend beyond the natural dimensions of their original swords; such as brass knuckles, broadswords, spiked shafts and even axes. This capability allows user to rely on smaller swords, while attaining greater reach, damage and the possibility of conducting surprise attacks as necessary.

Arikurin channels chakra through his Shindo Tanto to sculpt the blade into various rudimentary weapons using sound waves, and airwaves. 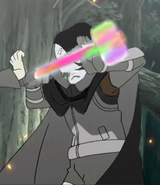 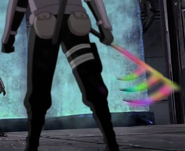 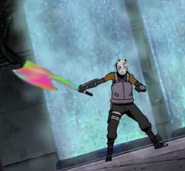