Susanoo, also known as the Tempestuous God of Valour (勇武の荒神, Yūbu no Aragami), is the third ability granted by the Mangekyō Sharingan to those who awaken the abilities in both of their eyes. It creates a gigantic, humanoid being that surrounds the user. As one of the strongest techniques granted to those that have acquired the Mangekyō Sharingan, it is the user's guardian deity, but at the same time, it consumes the user's life.

According to Tobi, for a Sharingan user to activate the Susanoo is a rarity. Like the other techniques granted by the Mangekyō Sharingan, the user's eyes and body are strained while using Susanoo because it consumes a large amount of their chakra. Sasuke described it as feeling pain in every cell in his body which only grew from prolonged use. Susanoo is formed through the materialisation of the user's chakra and as such differs in appearance as well as colour between users. Even though it envelopes the user, they can move around within Susanoo freely and use techniques from inside of it, as well as manifest parts of Susanoo — if the situation calls for it.

Despite Susanoo's impressive defensive capabilities, the protection it grants its user is not absolute. The user can be thrown out of the upper half of Susanoo by an enemy manipulating the substance underneath Susanoo. This was seen when Gaara used his sand to pull Madara out of his Susanoo. Also, a sufficiently powerful attack will still result in damage, especially during the technique's developmental stages after which the user is left open for attack. The only known ways to attack the user while Susanoo is active is either to draw the wielder out of the technique and then attack, bind and restrict its movements, or to break the defence with overwhelming force. Susanoo users are also vulnerable to attacks which don't actually deal physical damage to it, such as strong lights and sounds, that can also impair their ability to sustain Susanoo. The users are also still succeptible to such things as sound-based genjutsu.

Susanoo has several developmental stages. Practised users go through all the stages every time they manifest it, layering more advanced stages over earlier ones or stripping them away as is needed; they can choose to stop at any developmental stage. At its simplest level, users only manifest aspects of Susanoo's skeletal structure, such as a ribcage for basic defence or an arm for interacting with the surroundings. Once a full skeleton is made, musculature and, later, skin forms until finally a complete humanoid is shaped. In these early stages, typically only the upper half of Susanoo is materialised, with legs becoming common once it reaches its full humanoid form; however, not all Susanoo users can accomplish the latter feat.

In its next stage, armour forms around the humanoid for further protection, causing it to resemble a yamabushi. In its final stage, users stabilise the chakra that comprises Susanoo to create a colossal form known as the Complete Body — Susanoo (完成体 須佐能乎, Kanseitai — Susanoo, Viz: Perfect Susanoo, Literally meaning: Complete Body — He with the ability to help by all means), or as Origin: Susanoo (根源・須佐能乎, Kongen: Susanoo) by earlier users, the ultimate ability of the Mangekyō Sharingan. In this state, Susanoo gains a tengu-like nose, wings for flight, and is clad with robes and ornate armour. This form possesses power comparable to that of a tailed beast, capable of levelling giant mountains and, when enhanced by Six Paths Chakra, small planetoids with ease. Users can also channel their own techniques into the Complete Body — Susanoo, as well as shape it around the Nine-Tails to improve its offensive and defensive capabilities.

Users are able to mingle the chakra that makes Susanoo with chakra from other sources. Sasuke uses the chakra from Jūgo's Sage Transformation to make a "Senjutsu Susanoo" (仙術須佐能乎, Literally meaning: Sage Technique He with the ability to help by all means), with markings reminiscent of the Cursed Seal of Heaven spreading across it. He later stores the chakra of the nine tailed beasts within his Susanoo, drastically improving its strength and causing lightning to emanate from its back.

Tora Uchiha's Susanoo is depicted as dark green in color, with white glowing eyes. In its simple ribcage state, it takes on a different appearance than Ryun's, as the ribcage is larger and is completely enclosed, as opposed to being opened, like in Ryun's version. In its incomplete form, the spectral warrior is much larger than a typical Susanoo, with wider shoulders and more pronounced horns coming out of its head and chin. In this form, it can use its spirit weapons.

In its final form, it is depicted as having three arms and a beak, causing it to resemble a tengu. In its third arm it carries the Shikinen Sengū. 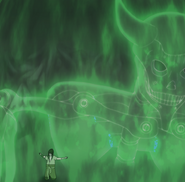 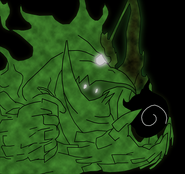 Rather than generate the magnificent ethereal warrior, Kazuhide's application of this technique is focused around the creation of various spectral weapons. These weapons are an extension of Kazuhide's own will and can thus are limited only to his imagination and chakra control.

This is a simple chakra blade that the users of Susanoo are capable of creating and wielding. . Despite their variations, each sword is extremely effective, and as Susanoo evolves, so does the sword.

Susanoo is capable of wielding an unusually shaped bow on its left arm. Not only can it be utilised to fire arrows created from the orb of chakra held in its opposing secondary arm, but it can also double as a shield strong enough to withstand attacks capable of shaving away at the terrain in its immediate vicinity.

The arrows, which are seemingly made with variable thickness based on the user's discretion, travel at a very high velocity and possess considerable piercing power; enough to easily breach a tree created by Wood Release. Even Kakashi, a ninja noted for his speed supplemented by the Sharingan's keen perception, was unable to dodge the arrows and forced to use Kamui to warp them away. Only Kabuto, while utilising the extrasensory capabilities of his Sage Mode, has been able to successfully avoid one of these arrows thus far. Upon reaching its final stage, the bow gained a notable increase in size, more closely resembling a shield.