Tee (ティー, Tē)[1] is an extremely powerful, if not the strongest, kunoichi from Kumogakure.[2] While just an infant she became the jinchūriki of the Matatabi.[3] She is the current leader of STATIC a secret organization tasked with carrying out the task given by the Daimyo.[1] A master of the art known as assassination, Tee is thought to be unparalleled by anyone in the shinobi world with her methods. With her skills she has gained a moniker that is known throughout the shinobi world, Agent White (代理白, Dairishiro, Meaning (Viz): White Agent). After her contributions to the village, Tee became the Seventh Raikage (七代目雷影, Nanadaime Raikage, Literally meaning; "Seventh Lightning Shadow") and the first female to hold the title.

While preparing for an important day, Tee starts off by gathering ingredients so that she can prepare breakfast. After finishing the meal she calls a boy's name to come down so that he can begin eating but there is no response.[4] After spending a few more seconds calling his name, Tee begins to look around the house for the person in question only to hear an explosion come from outside.[5] Having an idea of where he was, Tee frowned and began to head towards the door. Once she'd reached the outside area she met with a young boy, the one's name she'd been calling. He seemed to be practicing a technique happy at the fact that he'd learned it.[6]

Turned out Yoshirou was her son, who'd been training in the academy to become a genin.[7] After having a bit of a back and forth with Yoshirou about the importance of the inauguration, she proceeds to ask him if he'd spoken to his siblings. Yoshirou goes on to explain the situation to Tee and even passes some words stated by Hanaya Uchiha, which led to a big smile.[8]

After being crowned Raikage, Tee takes little time to reach out to the other Kages of the five nations in attempts to learning the others' political views. The first meeting was conducted with the Kazekage of Sunagakure, Soen. It starts off with Tee preparing for the meeting and her assistance, Kashira Shirugawa lending her aid.[9] Even though Tee is allowing this to happen, she expresses multiple times that she doesn't agree with the fact of needing to wear makeup for a video call. Which Kashira quickly counters by saying Tee looks much better when she's in makeup.[10] Standing to her feet from being annoyed by Kashira's statement, Tee is met by Atsuji; a village elder, who came to hand her the Raikage's hat as well as a few words of encouragement.

Appearance is everything for a female. Even for one with such a solid heart, and hard personality like Tee. Tee is average height dark skinned kunoichi, with a slim and sexy shape. In some interpretations, Tee's hair is brown. Though, in others, it is shown with a purple tint. It comes down to about her mid back, which when in a ponytail which is near her upper back, held up by a rubber band. She used to wear her hair long, but because she remembers all of the compliments Seigetsu gave her, she wears it in a ponytail. The front of her hair comes over her face splitting down the side of her temples forming into two bangs. She has a "U" shaped head, with a rugged styled chin. Her eyes are a golden hue, which appeared to be in perfect harmony when she and Seigetsu would look into each other's eyes. Her facial expression can be explained as "un-contained". Most believe it's because she is the female version of her father.

Aside from other Kumogakure-nin, Tee doesn't wear a Kumo distributed forehead protector. She wears a very tight fitting jumpsuit that shows all her curves and edges. The jumpsuit is white in color and sleeveless. She wears a jacket or scarf that free flows tied around her neck. Her butt and breast are emphasized heavily by this outfit. This attire with the addition of her physical appearance draws the attention of many of the men in Kumogakure. But after talking to her, the find out that her appearance and personality don't match up too well.

Despite being a female, Tee is still the daughter of the Fourth Raikage, making her extremely powerful. Both A, and the next Raikage, Darui have stated there is probably no woman currently living that can match her capabilities. Not only is she powerful from vouchers, but she has actually displayed her abilities in front of various witnesses. During a mission, Tee encountered Amaka Date, who at the time was the active leader of the Water Dragon Force. Tee both out-sped and overpowered Amaka and by the end of the battle Amaka walked away with several broken bones. The woman also stated that even with her ability to use the Dust Release, Tee was simply on a level she hadn't reached yet.

Because she is nearly the female interpretation of her father, she specializes in the same fields that he does. Her fightning style is primarily composed of utilizing ninjutsu with taijutsu to create nintaijutsu. Many believe that only the blessed can use nintaijutsu correctly, while others use a "imperfect version". Tee abilities have risen her ranks within the village going from chūnin to jōnin within a short year span.

For a woman, Tee possess extraordinary physical strength beyond one's comprehension. The Fourth Raikage, A, has stated that without a doubt she has surpassed him in his very own strength, even without the enhancements of his former subordinate. In her youth, A explained that while he was lifting a large dumbbell of his own, Tee has picked up a weight of her own and began lifting. Meaning, her talent started since she was coming up. Tee wears a weighted vest, as well as weighted anklets and wristbands. After waking up to a missing Seigetsu Uchiha in her bed, she roamed the village in anger collapsing houses, as well as breaking holes through mountains. These event only further compliment her physical strength. Many within the village know better than to anger her, as her strength knows no limits. The Unruly Child (利かん坊, Kikanbō) a moniker given to her by the elders of Kumogakure.

When one is primarily powerful in strength, at times they are lacking in the field of speed. Though for Tee this is completely untrue, and for someone of her figure, it would be quite suspicious for her to be unable to move as she pleases. Tee, while just running, can reach locations that most would need some time of travel assistance in half the time. Moving as swift as the wind can blow, Tee can slip into a battle of two people, intervene, land a blow, and still get out completely unscathed. Even though she is a user of the Lightning Release Chakra Mode, Tee doesn't use the Body Flicker Technique, to move as fast as A did. She instead uses her raw speed, which A has stated is on par with his very own even with the use of the Body Flicker. To go hand and hand with her speed, are her reflexes. She is able to react to "surprise" attacks as if they were coming to her straight forward. She is also double jointed, which helps her on different occasions as well.

Tee has large chakra reserves, and has complete control over all of her chakra. This is evident by her ability to successfully create a cloak of lightning that harnesses over her body similar to a haori. Tee's body is highly durable, being compared on two occasions to obsidian by both Amaka and Seigetsu. During their battle Amaka tried to cut through Tee with Hiramekarei which was proven futile.

Tee doesn't rely on ninjutsu, but this doesn't limit her from using it. She posses both the skills and knowledge to perform basically any ninjutsu she'd set her mind out to. She is able to create basic shadow clones as well as the lightning variation. The Shadow Clone technique she was able to use after just seeing it once, and the lightning variation after experimenting during her battle with Amaka Date. She has created her own technique where lightning covers her body like a haori. Tee is also able to utilize Seigetsu Uchiha's Raiketsu, and Kakashi Hatake's lightning blade — Lightning Blade becoming one of her signature techniques. Needless to say, even though it isn't her preferred style of fighting, she is skilled in the art.

Tee can use one chakra nature, and one chakra nature only: Lightning Release — which she has a natural affinity towards. Because it is her only nature of chakra, Tee has been utilizing it since she was a very young girl. Being able to create thin beams of chakra from the tip of her finger to pierce the target. Tee has developed numerous of her own lightning based techniques. This also includes enhancing many others. Tee is capable of using lightning to fend off against many other chakra natures. Manipulating her lightning based chakra in a sense, so that she can utilize it through her weapons; specifically her sword. Through some unknown means, she is able to create lightning which roars through the air, being able to nearly change the weather in a sense. As recorded, Tee is able to use the Raikiri as well as the Raiketsu. Raikiri allows her to form her hand as a type of blade coating in lightning to pierce her opponent's body. There is no defense that can fend off against Tee's Raikiri, as she is able to pierce any and everything. The thickest wall. The highest mountain. Even the most durable beings, such as Muzan. It was thought that Muzan's body was made of pure reinforced steel, and Tee was the first to cut through him.

Like her father, she can cover her body in a armor of lightning, which has different stages which, as stated by Darui, can only be activated by her unruliness. Not once, has she been seen powering all the way up, even during her rage after waking up to an empty bed side. Tee knows that even if she fought Seigetsu Uchiha, a speed demon in his own right, she would be able to easily outmaneuver his Sharingan as well as his straight tomoe Mangekyō Sharingan. It is safe to say Tee has actually master the Lightning Release Chakra Mode. Up to a point she is on par with A, who uses the Body Flicker Technique, while she uses just her natural and raw speed.

Taijutsu, the art of fighting with her fist, is what she predominately specializes in. Prior to training in order to learn new techniques, Tee showed her great strength through taijutsu by using the Choke Slam. During the academy's shinobi hand to hand training regiment, she grabbed the boy she had been facing by the neck and violently threw him into the ground with no remorse. She also uses techniques such as Lightning Straight, which cover her in her lightning armor to deliver a lightning fast punch to her opponents. The Liger Bomb is her favorite, as when she catches her opponents, and slams them into the ground, she gives off a heavy smile. While shouting the technique's name out loud. She can also use the signature Lariat.

Though good at ninjutsu, Tee specializes in the art of nintaijutsu just as her father and grandfather do. After one short month of research and evaluation, Tee had learned how to successfully utilize the Hell Stab; can focus his lightning chakra into his fingers, creating a strong piercing effect. There are various 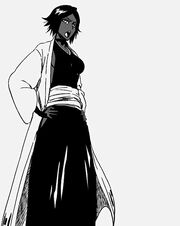