The Tenseigan (転生眼, Literally meaning: Reincarnation Eye) is a powerful dōjutsu used by the Ōtsutsuki clan. It is characterised by a blue pupil surrounded by a blue and white flower-like iris.

The Tenseigan was first manifested by Hamura Ōtsutsuki. Due to this, the combination of his two bloodlines, the Hyūga and the Ōtsutsuki clans, can evolve the Byakugan into the Tenseigan. This was proven a millennium after Hamura's time by one of his descendants, Toneri Ōtsutsuki, who awakened the Tenseigan by kidnapping Hanabi Hyūga and stealing her Byakugan. Toneri had to do this being born without eyes due to the sealing away of his clan's eyes within the energy vessel. As the last survivor of the Ōtsutsuki clan, Toneri concluded that mankind did in fact use chakra for evil purposes and he became determined to fulfill his clan's thousand year vow and destroy humanity by awakening the Tenseigan and dropping the moon on the Earth.

The Tenseigan allows the user to control both attractive and repulsive forces, similiar to the Rinnegan. Additionally, it also grants the wielder Tenseigan Chakra Mode, which in turn gives the user an increase in speed, power, strength, durability, and reflexes. It also grants its user Truth-Seeking Balls, thus granting the user all five nature transformations and Yin–Yang Release.

Fuyuki Haru is an exception to the normal blue color. Her pink Tenseigan arose from her Byaku-Seigan. Her white Byakugan turned sea green with a blue-white flower-like iris. When her Byakugan matured into the Tenseigan, the colors harmonized to create a pink hue.

Hikari Haru, a probably distant, probably close relative of Fuyuki, also has a special Tenseigan. Her eyes before maturation were the same as Fuyuki's: sea green with a blue-white flower-like iris. When matured, however, her Tenseigan became blood red instead of the pink of her relative Fuyuki, implying that an individual's Tenseigan's color may differ even if they share blood ties. Hikari's Tenseigan Chakra Mode is also blood red.

Yama Ōtsutsuki has a Tenseigan that allows him not to use his cloak. This gives him a major advantage because he could use Kin mode with this increasing his power. His Tenseigan is black with red lower-like iris when he is in a great rage. This doesn’t amplify his power but his defense goes up and his Tenseigan Chakra Mode turns black. 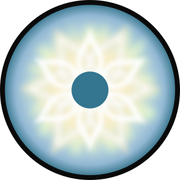