Start a Wiki
Tomoe (トモエ, Tomoe) is a descendant of the once nearly extinct Uchiha Clan, who traveled to the city of Kyōto in search of her only living relative. Upon arrival though, she was swept into a territorial conflict within the city that nearly claimed her life. Luckily, she managed to survive due to the unknowing intervention of her absentee father. The ensuing scenario also inadvertently granted her a vast amount of ocular power in the form of two separate dōjutsu. Currently, Tomoe is trying to find her place alongside her new family and comrades, while trying to master her rapidly growing abilities.

Tomoe spent the earlier days of her youth traveling with a caravan of merchants, alongside her mother. While in the company of this group Tomoe was offered the opportunity to witness the vast expanses of the mainland, visiting shinobi villages and civilian towns alike. Due to the wide range of her party's excursions, the group could not help but occasionally venture into through war torn territories. While the primary objective of the traders were the pursuit of profit, they had to be especially careful in locations where the rule of law had collapsed. At times, the caravan even had to worry about the potential threats of bandits and gangs that were left unchecked.

As Tomoe aged, and the continuous cycle of wars raged on, the life of a traveling merchant became more and more dangerous. Without the guarantee of protection while traveling through many nations became more prevalent, the area in which the group could safely operate rapidly shrunk. This quickly dug into their profit margin, as customers were less likely to purchase products that could be easily obtained in an isolated region. With time this forced the group to risk the dangers of war ravaged nations in order to make a living. Unfortunately, this risk was not without consequences. Under the threat of having their wares pillaged and their lives stolen, the caravan had to alter their practices from simple traveling merchants to smugglers. Under the cover of darkness, and poor weather, the group would hurriedly attempt to travel through hostile territories and perilous terrain that they would usually avoid. As such, the frail and the elderly were the first members the group began to lose, with even more members falling to ambushes. With the harsh conditions, resources became especially scarce during the cold seasons. It was due to these conditions that Tomoe's mother fell ill, after sacrificing a majority of her food and water to keep her daughter nourished.

Tomoe lost her mother and countless fellow members of the caravan during those dreadful winter months. Beaten, but far from broken, the young girl's eyes gleamed with a crimson shine that reflected both the pain in her heart and her conviction to keep surviving for the sake of those who made the ultimate sacrifice. With the life of a traveling merchant behind her, Tomoe sought out the father she had never met. Before her mother passed she learned that her father was a mercenary that arrived on the mainland with a group of islanders from the southern sea. With no other leads to follow Tomoe boarded the earliest ship that was sailing to the port city of Kyōto, unaware the fate that awaited her.

As a young girl Tomoe possessed fair skin and dark hair, which she kept just short of shoulder length. In addition to her noticeable ahoge, and the bangs of her hair framing her eyes, Tomoe tied a portion of her hair off with a small ribbon. Usually displaying an excited and engaged expression, a product of her insatiable curiosity, her personable nature is apparent to those around her. After awakening her pair of separate dōjutsu, Tomoe began wearing a medical eye patch over her right eye. In doing so she conceals her permanently activated Rinnegan, and its distinctive violet coloration and ripple pattern. When not utilizing the power of her left eye it takes on it's natural cyan coloration, a trait she inherited from her late mother. During that age Tomoe usually dressed in a sleeveless black dress, which extends down to her knees, over a pair of tactical shorts. Additionally, she wore dark lace up boots, rather than the standard sandals utilized by shinobi. Furthermore, in cooler weather she'd don a hooded jacket over her standard apparel.

As a teenage Tomoe grew her hair out considerably past her shoulders and has become significantly taller, growing into a slender build not unlike her father's. Her mastery over her dōjutsu has also allowed her to discard the use of the eye patch, due to the fact that she gained the ability to fully control the state of her Rinnegan. Her apparel has become more fashionable over the years as well as well, though her father considers it merely more expensive. Consisting of a white blouse, long leather boots, and a dark fur-lined jacket, she describes her attire as combat chic. 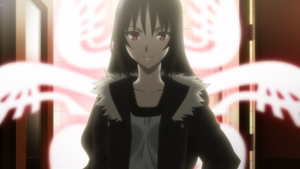 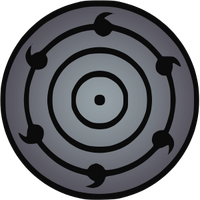 Retrieved from "https://narutofanon.fandom.com/wiki/Tomoe?oldid=626350"
Community content is available under CC-BY-SA unless otherwise noted.