Tomoyo Kōdona, also known as Shiori is the daughter of Ayu Kōdona and the spirit known as Raijin. She has an affinity in Lightning Release due to her father.

Tomoyo has shoulder length brown hair with bangs that hang over her forehead. She is usually seen wearing a single small hair clip. She has Hazel colored eyes to match her short brown hair.

Tomoyo usually doesn't experience strong, cravings, which results in her rarely overindulging. However, she has a tendency to become angry when things do not go according to plan. She is very sensitive about being treated fairly. She tends to be overwhelmed easily, which results in her avoiding large crowds. Tomoyo isn't shy or awkward around people but she doesn't like to be in the center of attention either. Tomoyo is ease to read in terms of emotions and most of the time she doesn't know how she truly feels. Despite bringing a princess, she doesn't think of herself better than other people.Her best quality is her strong sense of knowing what is right and what is wrong.

Tomoyo wasn't always so introverted, however after witnessing many of her fellow cult members die for her sake, she started to stay away from people to stop herself from feeling the same pain again.

Around her rival she has absolutely zero patience. Especially when it comes to Yuzuru's constant teasing.

Around the Raijin Cult

During battle, Tomoyo is usually calm and merciful but she isn't afraid to kill if she is forced to.

She was born with these unique abilities and because of that, the Raijin Cult believed that she was the daughter of the god of storms. When Tomoyo was six years old they asked the Kazekage to hand her over. Once an agreement was met the cult took her away and trained her in secret.

One day, when they traveled around the Land of Fire they ran into a very powerful Uchiha. Tomoyo asked this man to a quick spar, and out of respect for the religion he willingly obliged. This man won of course, however, after Tomoyo witnessed a very powerful lightning technique in action she begged the Uchiha to teach her. The man said: "If my daughter takes a liking to you, I will teach you everything." So, when Tomoyo arrived at Sasuke's house she started to play with the child. It didn't take long for the child and Tomoyo to become best friends. Three weeks later, Tomoyo mastered the powerful Lightning Release techniques along with a couple of other techniques.

Tomoyo possesses the kekkei genkai Hurricane Release, Storm Release, and Raijin Release. She is able to use all three of them with great skill.

Tomoyo's ability to wield ninjutsu is incredible for a girl her age. She certainly deserves the title as "The Blessed Daughter of Raijin" because of this. She is able to use most lightning-based ninjutsu without using any Hand Seals, even the famed Chidori, which is one of her favorite techniques.

Tomoyo was taught the Chidori by her sensei, Sasuke Uchiha during her brief time in Konohagakure.

Obviously, Tomoyo has an affinity in Lightning Release. However, she can use any element that represent her father's domain with great skill and power. Those elements are: Lightning Release, Wind Release, Water Release, Storm Release, and Hurricane Release. She also possesses Yin Release and Yang Release but she rarely uses it.

As a demi-spirit, Tomoyo has an incredible amount of chakra. It easily surpasses that any of the other members of the Raijin Cult and her "brother."

Tomoyo's skills in genjutsu is average for someone her age.

Tomoyo's was the ability to manipulate most forms of electricity with her mind. Her ability to use this trait isn't as powerful as her father's, but it's not something to be taken lightly. When Tomoyo is calm her electrokinesis powers are usually under control. However, the moment she becomes stressed or angry this power can get out of control and cause a lot of damage.

This ability allows to do Tomoyo to do a lot of things. For example: increasing the voltage of a technique, causing a small electrical shock upon physical contact, hacking into appliances, or creating lightning bolts without the use of hand seals.

Tomoyo has the unique ability to sense the electricity around her. The electricity can range from bio-electricity to the electricity found in lightning. This allows her to sense other beings nearby with ease. Tomoyo can also detect the changes in weather with extreme accuracy. Tomoyo is able to turn her sensing abilities on and off at will.

Part in the Story 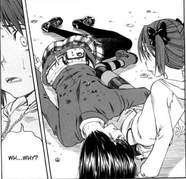 A Raijinist selflessly throwing away her life for the sake of Tomoyo; The Lightning Princess. 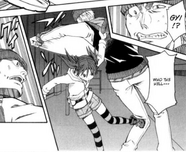 Tomoyo's taijutsu ability as a kid. 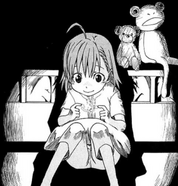 A six year old, Tomoyo meeting her "brother" for the first time.

Tomoyo as a child, is punished by her "brother" for being stupid. 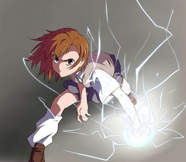 Tomoyo using the transformation technique to disguise herself is next to her rival: The Son of Fujin. She is obviously angry about something he just said.

Sasuke talking to Tomoyo after Tomoyo was beaten by Sarada in a taijutsu spar.
Add a photo to this gallery
Retrieved from "https://narutofanon.fandom.com/wiki/Tomoyo_K%C5%8Ddona?oldid=712096"
Community content is available under CC-BY-SA unless otherwise noted.