Toyotama-hime (豊玉姫, Literally meaning: luminous jewel) was the Kaguya Clan head responsible for the development of many of their techniques. Often called the Emperor's Mother (聖母, Seibo) and Our Lady of Heaven (天国の聖母,Tengoku no seibo), many Kaguya recognize her as the Land of Water's greatest warrior to date. In a time of never ending war, a women's position such as hers shocked the Shinobi World. But, her clan respected men and women alike. As long as they could fight till their hearts stopped, they gained recognition as true warriors. She was formally greeted as Lady Toyo by her clan. She chose not to use her surname in fear of her enemies attacking her family.

Her mastery of Shikotsumyaku lead to many Dances being created. Her more simplistic dances were passed down from member to member. However, their are many dances she created that went unlearned simply because of her pure skill and ability.

Her mastery of Shikotsumyaku lead to her constantly having horns protruding out of her head, something only her grandson could achieve... 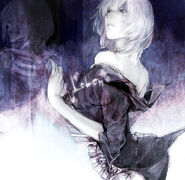