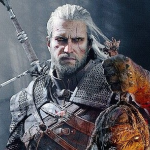 There are many stories that are nothing more than... pastiches, written by unimaginative copycats and lazy writers, repeating word for word events in other stories and wasting the time of the one reading it.

And then there are many stories that are written by shallow and greedy men pandering to their audience, not daring to break out of the cage they have built for themselves, to surprise them, to create something new.

And then there are those who blindly follow what is known as the 'canon', not daring to break out of the mold that the original Creators gave us. Yet if they gave us such great gifts of imagination and the ability to exercise our free will, is it not a travesty for us to cling to stringent and arbitrary conventions, to write stories that make no effort to create something new, something inventive, something different.

And that is why, Author, realize the truth of these words.

Where other men blindly follow others, fearful of creating something entirely their own, remember: Nothing is true.

Where other men are limited by the fear of their audience's backlash, by mainstream demand, terrified of breaking the mould and example set by society and their peers, remember: Everything is permitted.

To write what is right, and right what is wrong. We work in the dark to serve the light. We are Authors.

Nothing is true. Everything is permitted.

The Philosophy of Fanfiction: By Less Wrong

The First Law of Fanfiction states that every change which strengthens the protagonists requires a corresponding worsening of their challenges. Or in plainer language: You can't make Frodo a Jedi without giving Sauron the Death Star. Read any book on writing ever and it will tell you that stories are about conflict; a hero too strong for their conflict is no longer in tense, heart-pounding difficulty. For example, Dark!Dumbledore and Dark!Harry both permit a Harry strengthened over canon - the first by turning one of Harry's canon!allies against him, and the second by turning Harry against his canon!allies. The most spectacular application of this principle that I've seen is Harry Potter and the Wastelands of Time, in which Harry has gained all the knowledge of ancient Atlantis and has been through literally hundreds of Peggy Sue cycles in which he learns every possible twist of fate... and Voldemort, who unfortunately got to Atlantis first, has still won every time. The Mary Sue is not defined by her power, but by her lack of an even more powerful opponent. I mention this (1) so that you know I know it and (2) because the First Law of Fanfiction ought to be in a giant banner on every fanfiction site. The most fatal temptation of fanfiction writing is to think of how much easier some character's life would be if they were a ninja. We are naturally inclined to think up ways to solve our characters' problems for them, but must learn instead to make their lives more difficult.

The Rule of Rationalist Fiction states that rationality is not magic; being rational does not require magical potential or royal bloodlines or even amazing gadgets, and the principles of rationality work for understandable reasons. A rationalist!hero should excel by thinking - moreover, thinking in understandable patterns that readers can, in principle, adopt for themselves. As opposed to the hero just being a born "genius" who comes up with amazing gadgets through an opaque discovery process, or who pulls off incredibly complicated gambits that would fail miserably if the reader tried something similar in real life.

All fanfiction involves borrowing the original author's characters, situations, and world. It is ridiculous to turn around and complain if your own ideas get borrowed in turn. Anyone is welcome to steal anything from any fanfiction I write.

Retrieved from "https://narutofanon.fandom.com/wiki/User:AbysmalShadows?oldid=491655"
Community content is available under CC-BY-SA unless otherwise noted.