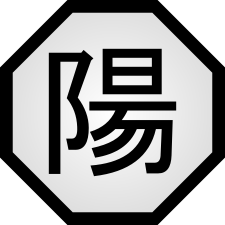 Yang Release (陽遁, Yōton, Viz: Light Style) techniques, based on the physical energy that governs vitality, can be used to breathe life into form. When combined with Yin Release, it allows for the use of Yin–Yang Release.[1] Yang is depicted as white in the manga and blue in the anime. The Six Paths Yang Power is represented by a sun marking on the wielder's right palm.

Yin and Yang were first mentioned in name by Yamato during Naruto Uzumaki's nature transformation training.[2] The Akimichi clan's Multi-Size Technique falls under Yang Release. Being descendants of the Sage of Six Paths through his younger son, the Senju clan predominantly inherited his Yang Release.

Yang chakra is also part of the tailed beasts' chakra. During the Nine-Tails' attack on Konoha, Minato Namikaze used the Eight Trigrams Sealing Style to seal the Yang half of the fox's chakra within Naruto.[3] Whenever Naruto is in Nine-Tails Chakra Mode, Wood Release techniques react to the Yang chakra's vitalising properties and mature into full-grown trees within a matter of seconds, either through contact or close proximity.[4] This was also shown to have the same effect on White Zetsu, whose genetic make-up is similar to that of plants.[5]

Retrieved from "https://narutofanon.fandom.com/wiki/Yang_Release?oldid=887097"
Community content is available under CC-BY-SA unless otherwise noted.