The Yoshida clan (吉田一族, Yoshida Ichizoku) is one of the famed mystic clans of the Land of Tao.
All females born into this family possess the Shintōgan, a kekkei genkai that gives them psychokinetic abilities in the forms of telekinesis, hypnotism, and neurokinesis.

The clan is traced back to Kazuko Yoshida, its origin ancestor and Taoist nun who first awoke the Shintōgan during her monastery's ritual. Prior to her untimely death due to mercury poisoning, she birthed two twin daughters, each of which would go on to unlock the secrets of the Shintōgan; from them, the Yoshida Clan would be built from the ground up.

At first the clan was small, poor and nameless, as the sisters and their mother had come from the Taoist Monastery; monks were humble and didn't have much to their names. However, with their powers, they brought great wealth and fame to their clan. After having served the various lords from the Land of Tao, the sisters were granted a large pot of land and many serfs with which they used to grow fields worth of rice. As a product of their trade and powerful status, the name "Yoshida" (吉田, Lucky Rice-Field) began to circulate and it wasn't long before the Yoshida Clan was officially established.

Since receiving the Shintōgan, the Yoshida clan has held its dōjutsu in high regard and has tried its best to prevent it from falling into the wrong hands, with varied success. Clanswomen are always at risk of being kidnapped and tortured in order to be used to give an outsider the powers of the Shintōgan, due to the need for great mental strain to occur for it to evolve and channel greater power.

There are even rare cases where fellow clansmen try to steal the eyes from the women of the clan, as they seek the powers not gifted to them by birth. Such incidents usually lead to bloodshed and often it's the woman who is killed first as a result of her masculine counterpart's jealousy and aggression. The penalty for committing such a crime is banishment, death, and in some cases, even castration.

Despite its seeming cruel treatment of women, the Yoshida clan is actually a matriarchy and the women are seen as the more powerful and knowledgeable figures, while the men are the tools of protection. Everything from the overseeing of the estate, to managing the workers, to leading the clan, to engaging in political meetings with other clan heads and bureaucrats; these are all the responsibilities of the "Great Matron", the clan leader of the Yoshida.

The Great Matron is chosen by the previous Matron, not by bloodline or democratic election. Whomever the current Matron deems most worthy is who shall take the up the responsibility as the future Great Matron. Usually, this is whomever the she considers the most powerful, gifted, and intelligent woman in the clan. Though there have been times where this method of leadership has been questioned, it has never failed the clan and so, throughout the generations, it has prevailed.

In order to awaken the Shintōgan, a female must first reach puberty. As such, the young girls of the clan are often kept safe and protected from the outside world. Fearing they'd be kidnaped for their powers, they are given little freedom to do what they want, or even go where they wish. Instead, they are often forced within the confines of the clan estate, ordered to remain indoors and trained in the fine arts as well as the kunoichi arts. From within the walls and windows of the estate, the girls practice their skills and crafts, all while watching the boys playing outside.

Once a girl has reached puberty, her Shintōgan is awakened, giving her telekinetic abilities that she must learn to control. She is then tutored by her older sisters and taught how to use her powers for the good of the clan. During this time, she is considered vulnerable to kidnapping, as she doesn't yet possess the skills to defend herself adequately; her powers are simply untamed. As a result, while she can still move around the confines of the clan estate, she must always be escorted by armed bodyguards wherever she goes.

Upon learning to control her telekinetic abilities, the girl is put through the infamous clan ritual where she is expected to awaken the Transcendental Shintōgan, the dōjutsu's highest form. She is escorted into a room with a ritualistic circle surrounded by candles. In the room, there is rosemary incense burning and her sisters are seated on the floor in seiza position. Ordered to stand within the circle, her silk robes are removed by an attendant and she's then bound with rough twine, which is embroidered with Taoist words of magic and Fūinjutsu markings. Hot, red, wax is mixed with plum juice and a small amount of human blood in a basin, forming the basis of the "ink" used to mark her body. With a soft calligraphy bruh made of fine white-rabbit hair, the ink is drawn unto her bare skin. These fūinjutsu markings take on that shapes and forms of hundreds of intricate patterns, shapes, and words, most of which are not written in the common tongue. Upon completion of the ritualistic writing, one of the clanswomen begins the awakening of the Transcendental Shintōgan.

The clanswoman opens her eyes, revealing her own Transcendental Shintōgan. She begins to hypnotize the young girl until she can no longer look away, her eyes fixed upon the clanswoman's, as if she was in a trace. Suddenly, the clanswoman uses her neurokinetic ability to force the young girl to feel any sensation the clanswoman deems fit, so long as the physical sensation puts great strain on the young girls mind and fortitude. Usually, the girl is forced to endured inhuman levels of pain for 2 days on end. Her telekinetic powers activate, trying to allow her an escape, but her abilities are suppressed by the chants of the other clanswomen and the fūinjutsu markings which seal her body, chakra, and spirit. By the end of the ritual, the girl has endured enough mental strain and has thus awakened the Transcendental Shintōgan. However, she is mentally broken and must undergo a long rehabilitation that can span from weeks to even months: Some girls never recover and their psyche is forever in pieces.

The clan has held this ritual sacred for generations, as a means to consistently produce able Shintōgan users. Natural occurrences of the Transcendental Shintōgan are few and far between and so this ritual is used as a way of forcing the eyes to become stronger. Ordinary torture can also produce the Transcendental to manifest, but such eyes are often imperfect and their powers are typically subpar. Going through the proper ritual can correct this error.

After having recovered from rehabilitation, the girl's life may go in any number of directions. She may choose to remain a servant of the estate for the remainder of her life where she'll be sheltered from harm and kept safe, but essentially restricted to the confines of the property; she may enlist as a kunoichi representing the clan if she has an aptitude for combat, but she will be given a jūinjutsu seal that will destroy her eyes upon her death, so as to prevent her eyes from falling into the wrong hands; she may be married off as the wife, or concubine of a powerful lord, but must first undergo a ritual that will make it impossible for the genes of the Shintōgan to be passed onto her children; she may also give up her eyes to a man of her clan in exchange for his eyes, so as to free her of the responsibility and what some consider to be the "curse" of the Shintōgan. If she chooses to give up her eyes, she may be permitted to act of her own accord, as her freedom no longer risks the loss of the clan's dōjutsu. After having been sheltered all their lives, the longing for adventure leads most into becoming kunoichi.

The ambitious few women who cannot stand having their life decided for them often desert the clan and wander the world as nomadic travelers and adventurers. Sooner or later, they usually end up as a kunoichi... or they wind up dead.

Members of the clan are trained in both combative and non-combative tai chi, focusing more on internal energy and fluid movement, as opposed to external force and brute strength. For those with the Shintōgan, they are trained in its use and taught its best techniques. For those who have mastered the ability to levitate, it often becomes an integral part of their fighting style, as having the added height, movement, and utility is quite useful and tricky to counter.

Most members of the clan possess a natural affinity for Wind Release, but are also quite adept in Earth Release. For users of the Shintōgan, wind and earth-based ninjutsu compliment their telekinetic and levitational abilities very well. Although not quite as common, some clan members are proficient in Water Release, although is fairly uncommon.

Of course, certain members of the clan are also trained in the weapon arts, particularly, but not limited to the men. The weapons of specialty are the sword and the Fighting Fan, with men usually choosing the sword and women choosing the fan, though there are cases where the opposite is true. The sword of choice is usually either the katana or the miaodao, while the fan of choice is either small and handheld, or medium-sized and handheld.

The clansmen and clanswomen are known for their grace and gentility and such carries over into their abilities. Their form is fluid like water, yet controlled as well. Their walk is soft and light, yet each step seems to carry with it a greater purpose.

The Yoshida Clan symbol is a purple-pink circle with an eye in the center, representing their Shintōgan dōjutsu, something they hold in high regard, to the point that they appear to be overly obsessed with it. To all who see the purple eye of the Yoshida Clan, fear and respect is expected; one must bow in the presence of a Yoshida clanswoman.

The clan's spirit animal is the white rabbit, and thus, their art, sculptures, and clothing pieces are often associated with it. They believe it brings them good luck and plentiful harvests, as their estate seems to have an abundance of the hares. The children love to play with them and many Yoshida even keep them as pets. 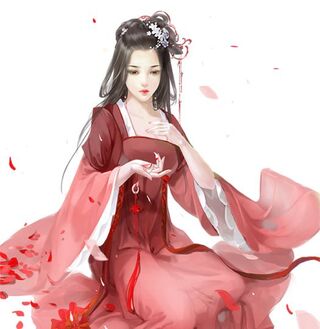 With regards to clothes and apparel, the Yoshida are quite extravagant in their tastes. Women and men alike typically wear Chinese-inspired hanfu robes or yuanlingpao, with women preferring colors like pink, purple, lavender, white, and sometimes even red. On the other hand, men seem to like grey, seafoam green, black, turquoise, and gold colors. While most clan members wear the closed-toe shoes typically worn with hanfu or yuanlingpao, women possessing the Shintōgan traditionally go barefoot, as a symbol of status and power; women with the Shintōgan's First Gift ability to levitate, don't need shoes or sandals to protect their feet, as they can simply fly and float above the ground. Not only is it a fashionable powerplay within the clan, it also serves as a way of exerting authority over the locals. Citizens believe these women to be goddesses in human form and blindly serve them.

Clan members typically have brown or light brown hair, with some having black and even fewer have white. For those with white hair, they are typically the most powerful Shintōgan users, a sign that the white rabbit spirit has blessed then with goo fortune and great power.

Retrieved from "https://narutofanon.fandom.com/wiki/Yoshida_Clan?oldid=869251"
Community content is available under CC-BY-SA unless otherwise noted.